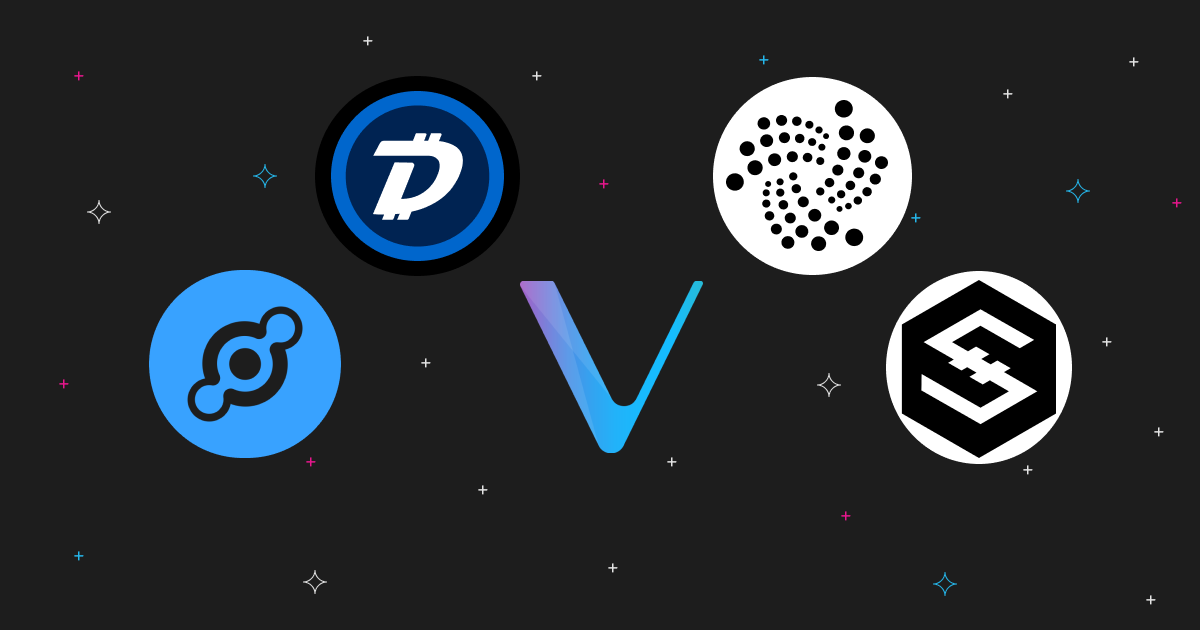 Distributed Ledger Technology (DLT) or blockchain holds immense potential that can help tackle some of the issues facing the Internet of Things (IoT) such as scalability and security. Many see blockchain as a digital information game changer for IoT because of the unique abilities and benefits it offers. To this end, we have seen several IoT-infused blockchains such as VeChain, DigiByte, Helium, IOTA, and IOST developed, of which we are going to be talking about some of them in this article.

IoT (Internet of Things) is a network that includes interconnected computers, digital and mechanical machines, people, or even animals that are fitted with unique identifiers (UIDs). They all possess the ability to transmit information over a network system that doesn’t need human-to-computer or human-to-human interaction.

IoT can be anything from a domestic animal fitted with a biochip transponder to a vehicle with in-built sensors or any other man-made or natural object that can be given an IP address. This address enables the transmission of data in the IoT network.

IoT provides the following functions such as analyzing, connectivity, active engagement, integrating, etc. Some of these functions are discussed below:

One of the functions of IoT is connecting several devices together across an IoT platform, which could be a cloud or server. This enables all devices to communicate with each other in an instance using high-speed messaging.

Once all devices are connected, the real-time analysis of collected information begins, which enables the building of effective business intelligence that results in a smart system.

The use of IoT results in a smart system that improves life and user experience via the utilization of data. For example, a coffee maker could sense you are low on coffee beans and order your preferred coffee beans from a retailer of choice.

Sensing, detecting, and measuring any changes in the environment and reporting the status is part of what IoT offers. This is achieved through the sensor devices that make up part of the IoT technologies.

Many see blockchain and all they think about is a cryptocurrency like IOST crypto, VeChain coin, Helium token, Digibyte coin, etc. However, blockchain is more than just cryptocurrency even though it’s the very essence of it. It is a public ledger with irreversible records of processed and current transactions. The blockchain can also account for asset tracking in a business network.

These assets can either be tangible (i.e. buildings or paperwork) or intangible (patents or intellectual property). As long as such an asset is considered valuable then it can be tracked or traded on the blockchain network whilst eliminating the high cost of trading and guaranteeing security.

How does blockchain work?

People are often curious about how the blockchain functions. The blockchain is a distributed database system that consists of various data blocks joined via cryptography, with information held on each transaction done on the network.

Each node in the network can not only process transactions but also view them, making it easier to summarize and record on an individual block. Each block also makes use of a hash to link its previous block and history. Finally, blocks are then verified by miners.

Miners are more like bookkeepers and they are essential in the blockchain network. They confirm the legitimacy of transactions in the network.

Furthermore, nodes are designed to provide enough computing power required to use the “brute force method” in calculating a predefined hash for each block. This is also known as Proof-of-Work (PoW).

The moment a new block is finished, information from the completed block is transmitted to all nodes in the blockchain network and then saved on the local copy of the network. In addition, Blockchain does not allow any form of alteration and even the slight alteration will bring about a huge effect on the hashes.

What are IoT blockchain solutions?

IoT blockchain solutions are designed to ease the use of blockchain technology for everyone. IoT provides devices with the capability to send data to private blockchain networks and to create immutable records of shared transactions.

With IoT blockchain solutions, the problem of trust in captured data can easily be solved. Identifying, validating, and verifying devices from the time of manufacturing to their current stage of operation with blockchain is also made possible. Here, we will discuss some of the IoT-infused or IoT-focused blockchain networks.

HNT is a decentralized blockchain network solely for IoT devices powered by Helium’s native token (Helium Coin HNT). Helium Crypto was launched in July 2019 to ensure a smooth future for Internet of Things IoT communications, by identifying insufficiencies in the system.

The Helium mainnet is designed in such a way to enable the transfer of data across its network of nodes while allowing communication between wireless devices.

The nodes are designed as Hotspots, a combination of wireless gateway and blockchain mining devices. With the Hotspots, the device users can operate nodes and mine. Miners earn rewards in Helium native tokens (HNT).

What is VET coin? The VeChain coin is a native token of the VET blockchain that was started in 2015. VeChain crypto is known to be a blockchain-powered supply chain platform and the platform was launched in June 2016.

VET coin crypto’s goal is to create an ecosystem that is powered by distributed governance and IoT tech. With the aid of this ecosystem, VeChain is hoping to solve some supply chain management problems.

There are two native tokens on the Vechain exchange platform, which are the VET token and VTHO.

What is IOTA crypto? Just like the Helium blockchain, IOTA is also established in the IoT ecosystem. The IOTA (MIOTA) functions as a distributed ledger that records and carries out transactions between IoT machines and devices. IOTA is powered by its native cryptocurrency known as IOTA Coin (mIOTA). The mIOTA coin is also responsible for accounting transactions in the network.

One of the reasons why IOTA stands out from the rest is its Tangle system. The sole innovation behind the IOTA blockchain. Tangle is a network of nodes used for verifying transactions, which is acclaimed to be more efficient and faster than regular blockchains.

DigiByte DGB is also an open-source blockchain with varieties of functions like asset creation and smart contracts. DGB was initiated in 2013 around Oct, which later mined its genesis block of DGB coins in 2014 as a fork of Bitcoin. Digibyte DGB blockchain is an outstanding cryptocurrency technology that utilizes five kinds of algorithms.

The five algorithms function to improve security, capacity, and transaction speed. There are also three layers to the DigiByte DGB network, which are smart contracts “App Store”, public ledger, and protocol core. The core is responsible for relaying transactions and it consists of nodes.

What is IOST token? IOST is one of the next-gen cryptos and decentralized blockchains that provides quality functions for its users. The IOST crypto claims to be a very fast and complete decentralized blockchain. It is also an ecosystem with its own nodes, wallets, and next-gen consensus protocol known as Proof-of-Believability. The Proof-of-Believability ensures all transactions on the network are secured and efficient.

Over the years, blockchain application with IoT has been noticeable in various sections of the industry such as banking, financial services, motor companies, and the agricultural sector. It doesn’t stop there. It has also extended its reach into smart homes, supply chains, logistics, and even smart contracts.

Using smart contracts to apply blockchain tech to the IoT ecosystem, provided the set of conditions are met, was only a matter of time. This also guarantees the decentralized capability of a smart device to function solely without the permission of a centralized authority.

In addition, blockchain is capable of imposing a high standard of security by authentication and authorization of encrypted device-generated data via decentralized or distributed ledgers. This is possible because a distributed ledger is more of a data computation and storage unit that spans across millions of devices.

Thus, the IoT ecosystem remains unaffected whenever there’s a device or server failure. Even with nodes taken offline, the network can continue operation due to the resiliency of the blockchain network that has reached fault tolerance.

Choose the best IoT crypto for you on Swapzone

Step 2. Select any IoT coin pairing from the list of tokens. After which Swapzone will pull up all the IoT token exchanges regarding the selected token pairing. For example, if you want to swap LTC for IOTA, Swapzone will compile a list of LTC to IOTA exchanges for you.

Step 3. Input the amount of crypto you want to exchange in the “send” section, then you can select the exchange that suits you by clicking on the “exchange” button.

Step 4. Input the address where you want to receive the crypto.

Step 5. There is also an option for a refund address, which is the address where the asset you are swapping for the cryptocurrency will be refunded to incase of any issues.

Step 7. Wait until the exchange is processed. Now you can rate the provider and leave an honest review. This is very important to us!