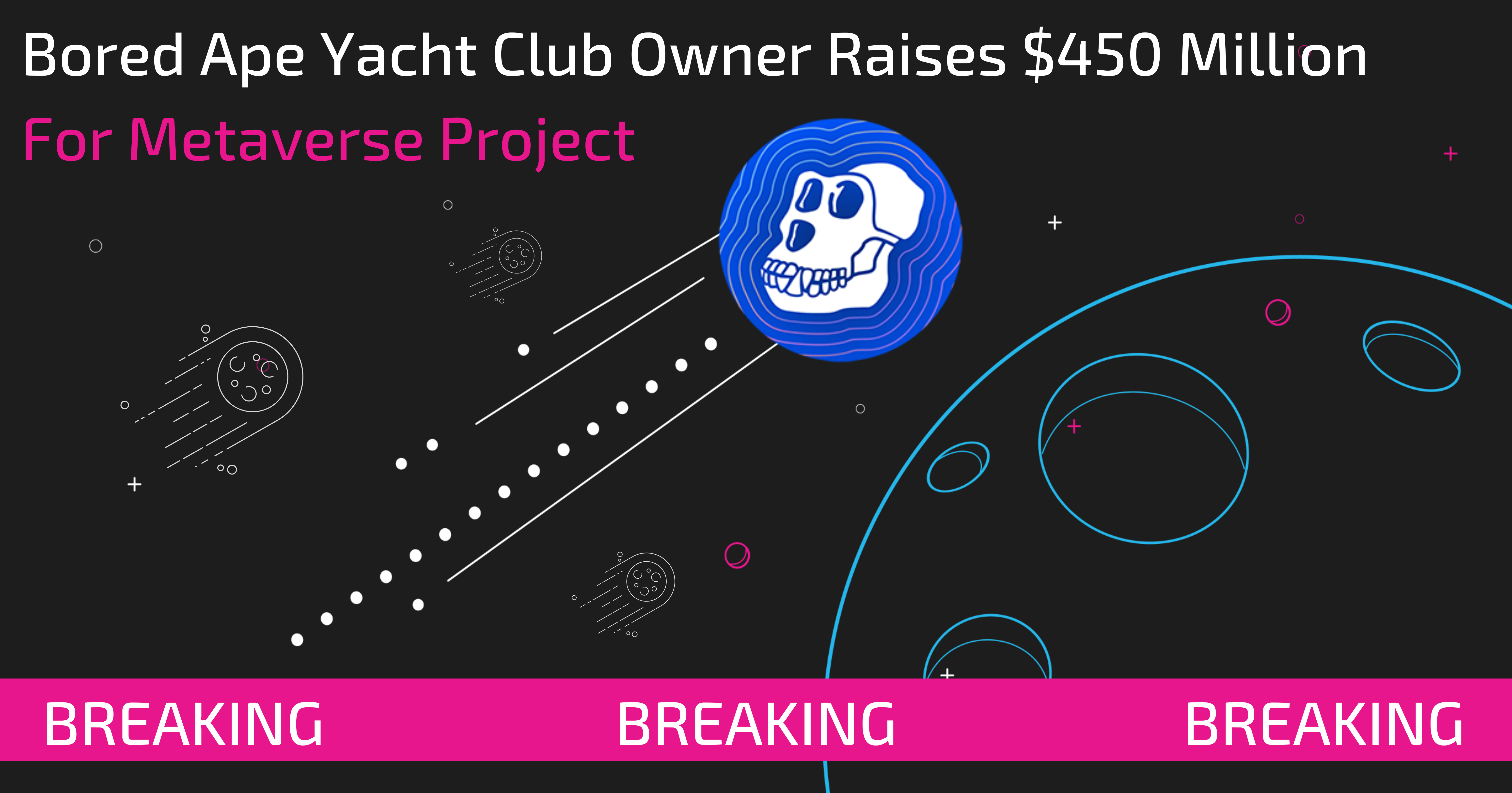 Yuga Labs, the company behind the Bored Ape Yacht Club NFT collection, raised an estimated $450 million to fund its push into the metaverse.

Yuga Labs has been on a roll lately. The company acquired CryptoPunks on March 11th, which pushed its valuation to over $4 billion, and it launched the BAYC native ApeCoin (APE) on 16th March.

According to Yuga Labs, the funds will be invested in the development of a metaverse called ‘Otherside’ built around the BAYC ecosystem and its native ApeCoin.

Yuga Labs hasn’t provided many details about the ‘Otherside,’ but on 19th March, they posted a trailer of the Otherside metaverse on Twitter with the caption “See you on the Otherside in April. Powered by @apecoin.”

The short clip of the Otherside begins outside the Bored Ape Yacht Clubhouse, where one of the typically moody apes is fishing in a swamp.

The Ape appears to be on the cusp of landing a fish when he pulls a glowing bottle from the water and drinks it without a second thought.

Moments after taking a swig of the glowing liquid, the Ape is hoisted into the sky and gets a bird’s eye view of the emerging metaverse below.

The exciting trailer culminates with the Bored Ape coming face to face with numerous big names in the NFT game, such as a CryptoPunk and a CrypToadz that are hovering together in a spaceship.

Wylie Aronow, the co-founder of the Bored Ape Yacht Club, told The Verge that they want to build a “gamified interoperable world” that is fully decentralized.

Nicole Muniz, Yuga Labs CEO, added that the Otherside would be open to everyone, not just BAYC owners, but she said that no specific date for the launch had been set.

Chris Dixon, the head of a16Z’s crypto arm, spoke to Verge about the Otherside project.

Chris said: “There’s a dystopian future where Meta [previously Facebook] is this kind of dominant digital experience provider, and all of the money and control goes to that company.”

According to Chris BAYC and the Otherside offer an alternative to Mark Zuckerberg’s Meta, he added: “To me, Yuga Labs, combined with these other emerging [Web3] companies, are an important counterweight to companies like Meta.”

ApeCoin To The Moon

The funding round for the ‘Otherside’ is linked directly to the recent launch of the ApeCoin.

APE is a governance token that the community will use to make decisions on the future of the BAYC.

The token was launched last Thursday, 17th March, at around $7; the token exploded following the launch and hit $17 within 24 hours, according to CoinMarketCap.

APE has lost some of its gains since hitting $17, but as of writing it’s still nearly up 100% since it launched and trades at just over $12.

APE’s market cap has risen quickly since last week, and it’s currently sitting just above the $3 billion mark, according to CoinMarketCap.

Use Swapzone To Pick Up Some APE

BAYC’s push into the metaverse could be immensely profitable, and the APE token is set to play a central role in the project.

Let’s look at how Swapzone can help you get involved in the BAYC project by adding APE to your portfolio.

Let’s say you want to swap some USDC into APE; simply follow these steps:

Good work! You’ve added some APE to your wallet, and you’re all set for the launch of the Otherside.