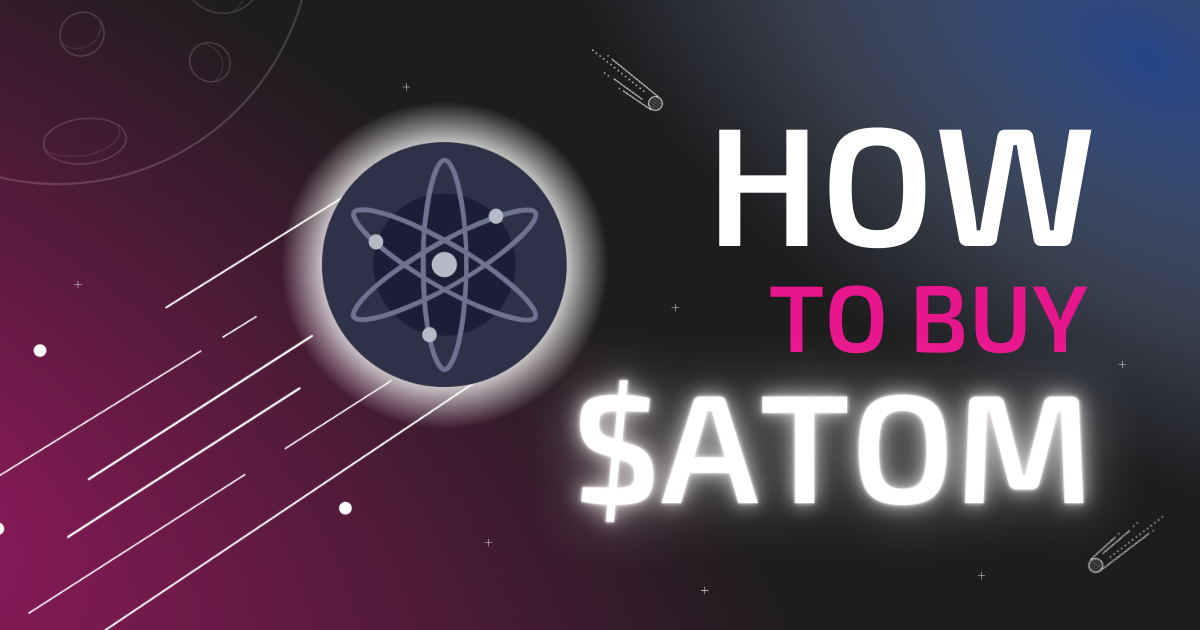 Cosmos is a protocol consisting of several other interoperable blockchain protocols, all contained within a single network. It is, in simple terms, a blockchain network of blockchain networks. The network was founded by developers Jae Kwon and Ethan Buchman in 2014. Kwon and Buchman realized the need for blockchain systems to interoperate and exchange information, regardless of the underlying technologies backing these systems, hence the Cosmos network was born.

The network has seen massive success and recorded 5.8 million IBC transactions with a market cap of over 60 billion USD in 2021 alone.

ATOM is the digital token native to the Cosmos network. The ATOM token helps support the Cosmos blockchain by tracking and maintaining transactions made using its protocol. It also provides users with certain privileges, such as the ability to participate in decision-making processes where the Cosmos blockchain is concerned.

If you’re interested in adding the ATOM token to your crypto investment portfolio, Swapzone is the best custom trade aggregator to buy, sell, or swap your cryptocurrency. We offer the best rates, with low fees, and no registration required.

To trade ATOM using Swapzone, follow the steps outlined below.

Swapzone makes buying ATOM as quick, easy, and hassle-free as possible. On Swapzone’s ATOM Swap Page, two bars indicate the cryptocurrency you wish to swap ATOM for, and ATOM itself. Swapzone offers you an extensive range of cryptocurrencies to choose from, including Bitcoin (BTC), Ethereum (ETH), and Monero (XMR). For the purpose of this guide, Ethereum (ETH) will be used as a demo.

Step 2: Input the Amount of ATOM You Want

As earlier mentioned, there are two boxes displayed on the swap page, a send box, and a get-up-to box. You input the amount of ATOM you’re willing to send in the send box, and input the cryptocurrency you would like it to be exchanged for in the get-up-to box. The algorithm will instantly provide an estimated amount of returns that could be gotten for your desired amount of ATOM. This amount is prone to fluctuations due to volatile market conditions. You can also choose to apply filters, depending on the rates or partners you prefer.

After you input the amount of ATOM you need, as well as the cryptocurrency you wish it exchanged for, Swapzone scans the web and displays a list of the best possible rates with the available exchanges and partners, depending on the filters you have applied. You can then proceed to choose which rates suit you best and click on the blue exchange button.

After this, the page will prompt you to input your wallet details. This is where your ATOM will be deposited after the swap is successful. Enter your correct wallet address details, first your ATOM wallet address, and your emergency refund Ethereum (ETH) address, just in case the transaction fails. If you wish to receive news updates and exclusive offers from Swapzone, you can also input your email address. Ensure the details you enter are correct, as tokens sent to wrong wallet addresses are difficult, if not impossible to recover.

Next, you deposit the amount of ETH listed in the get-up-to box into the wallet address provided on the page. As with the step above, ensure you input the correct wallet address, to avoid the loss of your tokens.

Step 6: ATOM is Swapped for ETH

Once the transaction is complete, your ATOM tokens will be deposited into the wallet address you previously listed. This process can take between half an hour to a minute. Check your wallet to confirm if the ATOM tokens have been deposited. If they have, congratulations, you just successfully purchased ATOM tokens using Swapzone’s top-notch aggregator offering.

The ATOM token is essential to the running of the Cosmos blockchain, and as such, holds immense value. Users who own and stake their ATOM tokens get to vote for or against changes intended to be made to the Cosmos blockchain. The number of ATOM tokens a user stakes, the higher their voting power. Users who are unwilling to personally stake their holdings can assign any amount of their ATOM tokens to other users who can stake on their behalf. This allows users to apportion some of their voting power to other users, while still earning a percentage of ATOM rewards.

While ATOM’s price peaked at an ATH of $44.70 in November 2021, barely seven months after, it trades at $7. However, its price is generally expected to rise in the coming months according to several analysts.

Similarly, PricePrediction is just as optimistic and forecasts Cosmos’ flagship coin to trade at $18 in January 2023.

However, in the long term, the deep price predictor is more cautious. PricePrediction opines that Cosmos might not eclipse $20 till 2027.

Overall, considering Cosmos’ project and the current state of things, ATOM is expected to rise in the coming years. How quick this happens, however, is almost anyone’s guess.