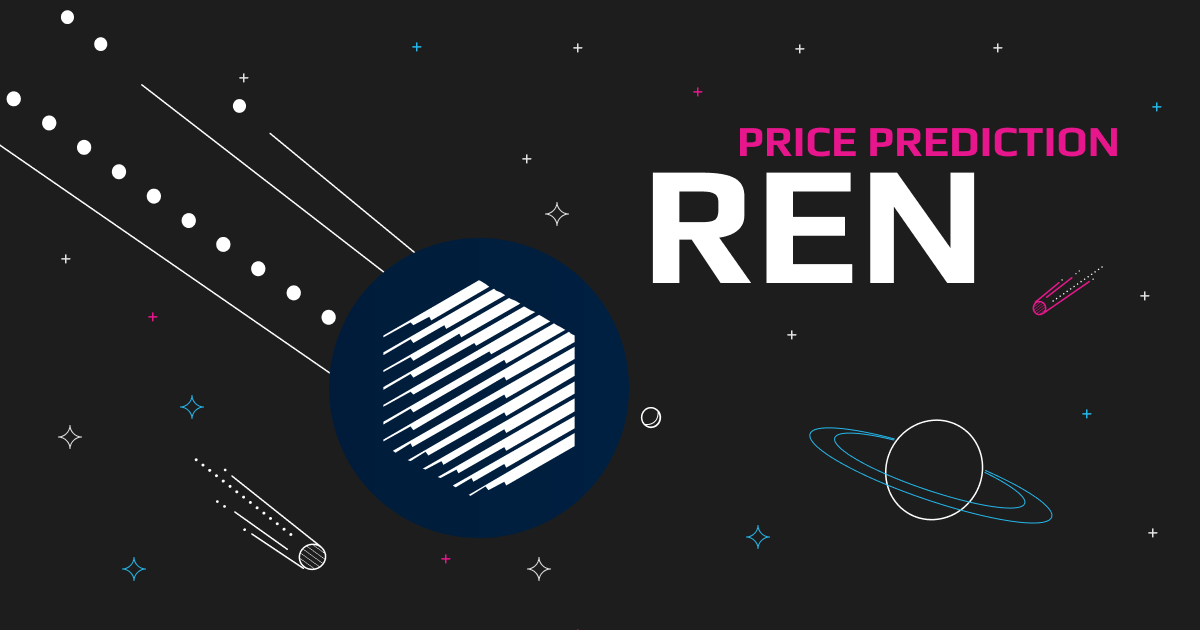 The Ren (REN) network is designed to link the king of cryptocurrencies, Bitcoin (BTC), with the increasingly central part of the crypto-sphere Decentralized Finance (DeFI). Before REN, if someone wanted to use their BTC for yield farming, they would have to jump through a lot of hoops, but thanks to the REN network, the process is being simplified.

The REN token is currently trading around 85% below its all-time high, so is this a good time to go long on this DeFi play? In this article, you’ll get all the information you need to understand REN and get a summary of the price predictions of expert analysts.

Investing in crypto could be a very profitable decision, especially if you consider how early on we are in the market’s development. However, investing blindly in a project is a dangerous game so before we dive into the price predictions, let’s review REN.

What Is a Ren Coin?

The Ren network was launched in 2017 by two software developers called Loong Wang and Taiyang Zhang. The project was initially named ‘Republic Protocol’; however, in 2019, it was renamed.

The idea behind the project that has a market cap rank of #208 is to connect Bitcoin with DeFi and thus make it possible for BTC holders to earn rewards for holding the token that doesn’t have a staking feature like other popular cryptos.

The network allows users to swap their coins on one blockchain for the equivalent on another blockchain which theoretically makes it possible to lend on an Ethereum-based network using Bitcoin as collateral.

The network adds an additional use case to Bitcoin and expands the DeFi ecosystem, which adds value to the cryptocurrency ecosystem.

Is Ren A DeFi Coin?

The REN token is slightly different from other tokens you may have come across. Normally a token is used to pay for transactions and governance features. On the Ren network, you don’t necessarily have to use Ren Coin. Transactions can be paid for in the native crypto of the blockchain you’re interacting with through Ren.

Please don’t despair thinking that the REN token is useless just because you don’t have to use it when interacting with the Ren network.

The Ren network is operated by DarkNodes which process transactions and receive REN for doing their job well. To become a DarkNode, a deposit of 100,000 REN is required and locked up in a smart contract.

As you can see, REN is not your average DeFi token, it’s not used by everyone who interacts with the network, but the nodes running the network have to invest heavily in REN before they can start validating transactions.

Now you’re familiar with REN; it’s time to check out its price history and forecasts.

REN started 2021 trading at $0.3 following a bumpy end to 2020; within the first week of January, it was clear that the bulls were in control of REN as its price doubled to $0.6 in just two weeks.

The January rally continued on into February, and by the middle of the month, it was over $1 and eyeing up a new all-time-high.

A spike at the end of February saw REN move above $1.7 representing a near 6X from the start of the year.

A new all-time high looked almost certain for REN, but the February spike ended with a sudden crash, and the token gave up all its 2021 gains by July.

In August, REN started to trade positively again and broke above $1 in October before coming down to $0.5 at the end of the year.

It’s safe to say 2021 was a crazy year for REN, and even though it didn’t hit a new all-time, there were plenty of opportunities to make a profit trading the token.

Ren Crypto Price Prediction: How Much Will Ren Coin Be Worth?

Ren set itself an ambitious goal of linking blockchain networks together within the DeFi space. The project has been a success, but at the same time, we have to remember it faces stiff competition from other DeFi projects such as AAVE and the Anchor Protocol. The success of REN will be determined by the network’s ability to grow its user base; most analysts are relatively optimistic about its future.

Inflation, war, and COVID-19 have hit the global economy, stock market, and cryptocurrencies hard this year, and REN has seen its price hammered as a result.

The experts aren’t rattled by the bad start to the year and expect REN to recover in the second half of the year with an average price target of $0.38 and a maximum mark of $0.46.

The maximum price target for the token in 2023, according to TradingBeasts, is below $0.5; other major analyst sites agree with this somewhat bleak outlook.

Cryptocurrencypriceprediction.com is far more bullish on REN than most analysts and expects the token to trade above $1 throughout 2023.

If the macro-factors impacting the global economy have passed by 2024, then Ren could be in for a strong year. Conservative estimates see REN trading above $0.5 in 2024, which is nearly double its current price. Some bullish analysts expect REN to start moving into the high $1 range by the end of 2024.

If you are looking to hold REN for a few years, then by 2025, most experts believe you will be in the green. Conservative analysts forecast REN to be trading around $0.6 in 2025 and as high as $3.5 by more bullish experts.

Predicting where a token will be accurately is not a simple task; However, we can’t begin to weigh all the variables that will impact REN in the next eight years, but we can confidently say that DeFi will probably continue to expand and if REN plays a central role in this expansion it could be going to the moon.

Is Ren Coin a Good Investment?

REN coin appears to be a solid bet in the long run, but it might take a few years before you see it produce considerable returns.

For REN to reach $10, the project would have to secure a firm foothold in the DeFi space; some analysts believe that this is possible and see REN hitting $10 by the end of the decade.

Where Buy Ren With Crypto With the lowest fees?

Swapping BTC or any other crypto for REN through Swapzone is extremely easy and ensures that you pay minimal transaction fees by comparing 15+ exchange providers. Follow these simple steps to buy REN with BTC: