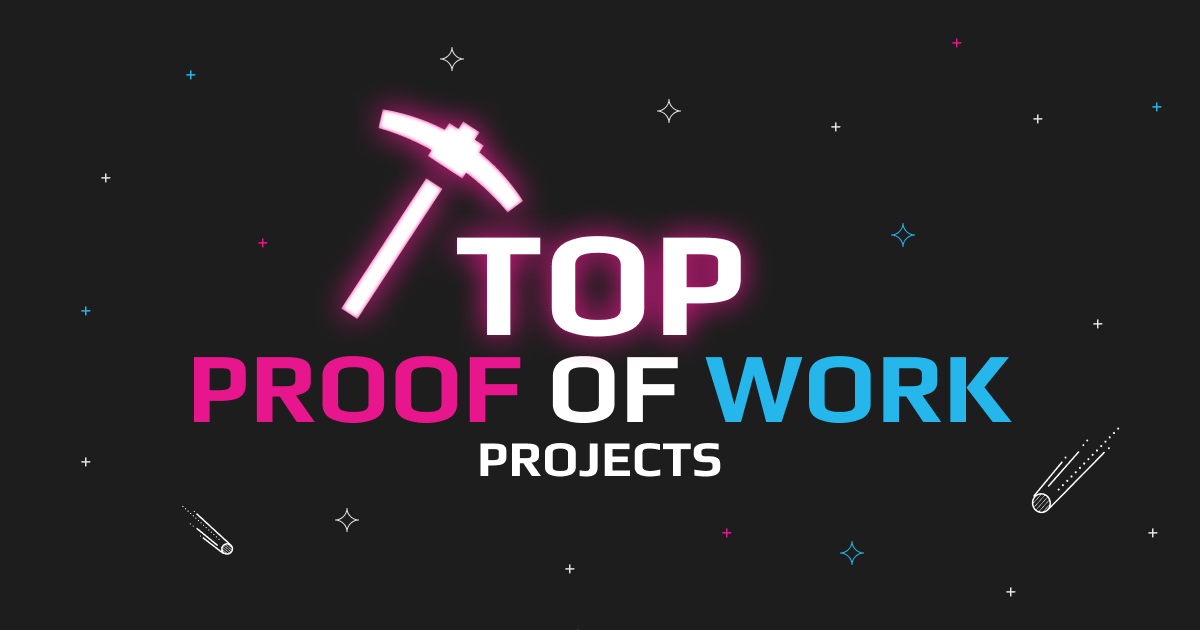 8 June, 2022 is set as a date of Ethereum Merge – the second largest crypto is at the finished line of finally going Proof-of-Stake. Some say PoW consensus is reaching its limits, some (fewer in number) – that is the first original crypto technology and has to live despite all the negative impact. In this article we will not be commenting on PoW to PoS “war” but will make a recap on the largest Proof-of-Work projects and present to your attention the most significant coins using PoW.

What is Proof of Work?

The main criticism of cryptocurrency was the double-spend issue. Since cryptocurrency is merely data, users could potentially use the same units of digital money for multiple transactions before it gets registered in the system.

Bitcoin (BTC) was the very first cryptocurrency to come into existence. First proposed by an anonymous internet user, Satoshi Nakamoto, in 2019, the decentralized currency uses a peer-to-peer network to conduct transactions directly between equal and independent participants. As the first cryptocurrency to be listed on the market, Bitcoin had the biggest role in paving the path to other advancements in the blockchain space.

Bitcoin is produced through a process called “mining.” Miners are rewarded with new bitcoins for verifying and committing transactions to the blockchain.

This process of verifying and committing transactions is how new bitcoins are added to circulation. As more people join the Bitcoin network, mining becomes more difficult and requires more computational power. This has led to an arms race among miners, and the decreasing Bitcoin rewards is making the process less profitable by the day.

Bitcoin is deflationary, meaning that there will only ever be 21 million Bitcoins in existence. At the current pace of mining and a block time of 10 minutes, the last Bitcoin will be mined in 2140.

Ethereum (ETH) is a layer-1 blockchain and was the first to decentralize the entire financial system as we know it, unlike just transactions like Bitcoin. This was achieved through smart contracts (immutable self-executing pieces of code on the blockchain).

Ether, had an initial sale of over 60 million. The crypto project was funded through crowdsourcing and had an Initial Coin Offering (ICO) of $0.311 in 2014. The aim of ETH is to be a global decentralized platform for DApps.  As one of the biggest networks listed on the market, ETH is also considered the pioneer for smart contracts on blockchains.

Just like Bitcoin, Ethereum also uses the Proof of Work consensus method to validate transactions. However, the network is in a transitory phase to shift to the Proof of Stake model to increase throughput and be more sustainable.

Litecoin (LTC) is one of many cryptocurrencies that use blockchain technology to facilitate secure financial transactions. It differs from other cryptocurrencies like Bitcoin in that it uses a different mining algorithm called “Scrypt”, which is intended to make it easier for regular users to mine coins.

It has extremely low transaction fees, making it a good choice for micro-transactions and point of sale transactions. Launched in 2011, it is the second most popular cryptocurrency after BTC.

The LTC mining per block reduces every four years. This is due to the block reward halving schedule on the network. Litecoin uses the Proof of Work algorithm to prevent any downtime and for quick validation of transactions.

While BTC holds the title of the most popular cryptocurrency, it has a few drawbacks that make it unfavorable to some investors.

Bitcoin Cash (BHC) was developed in 2017 as an alternative that addresses some of the issues of Bitcoin. It is a peer-to-peer electronic cash system that offers a cheaper and quicker alternative to payments.

Due to the highly competitive nature of BHC mining, miners tend to bring in more hash rates to produce more blocks that are accepted by the network. Mining equipment and full node software are required to begin mining Bitcoin Cash.

Monero (XMR) was launched in 2014 with the goal of providing users with a secure and anonymous mode of transaction. The transparent nature of blockchains prevents cryptocurrencies like BTC to be truly anonymous. Rather, they are considered pseudonymous. XMR, on the other hand, uses advanced cryptography to conceal users’ identities.

XMR aims to be wholly decentralized. To aid this goal, the networks are secured using CryptoNight, a variation of the Proof of Work algorithm. The nature of the algorithm prevents large mining farms from whaling Monero.

Zcash (ZEC) is yet another cryptocurrency that aims at prioritizing the privacy of users. While ZEC transactions use a public network, the details of the transaction remain private. However, as per regulatory norms, such information may be revealed upon requirement.

The network uses the zk-SNARK, a zero-knowledge proof technology based on the Proof of Work consensus mechanism. It allows the network nodes to quickly verify transactions without needing to disclose sensitive information tied to the payments.

Founded through a hard fork in ETH, Ethereum Classic (ETC) came to the market in 2016. The main function of the coins is as a smart contract network. It hosts and supports various decentralized applications (DApps). Despite it being borne out of ETH, the roadmaps of the two networks diverge.

ETC uses the Proof of Work algorithm to secure its network. However, as a minority chain, it has been the target of numerous attacks including 51% attacks over mining hash rates and double-spend coins. The reward for mining ETC blocks declines over time as a deflationary measure.

Dogecoin (DOGE) was developed in 2013 by Billy Marcus and Jackson Palmer. The popular Shiba Inu meme-inspired the name and logo of the open-sourced coins. The coin was intended to be an ironic joke against cryptocurrencies like Bitcoin, but eventually, it gained value through Reddit discussions and Elon Musk tweets.

Dogecoin uses Scrypt technology for Proof of Work. The supply of Dogecoin has no cap so an unlimited amount of coins can be mined. Miners can mine individually or join mining pools. The system requirements for mining are simple enough – a PC with Windows, iOS or Linux, and a GPU.

Dash (DASH) released a whitepaper that states the project is designed to improve upon BTC by offering better privacy and quicker transactions to users. The name Dash was coined as an amalgamation of “digital cash”.

Launched in 2014, it was developed as a fork from Litecoin. The network offers unique features such as InstaSend, ChainLocks, and PrivateSend.

For security, Dash uses a two-tier network system for transactions. The first tier uses nodes that verify blocks through X11, Dash’s unique Proof of Work algorithm. It uses 11 hashing algorithms to complete the sequence. Before a transaction can be added to the blockchain, at least 51% of nodes must approve. The second tier relies on master nodes that use the Proof of Service algorithm.

While it is an energy-intensive process, it is one of the most secure and decentralized consensus models in existence compared to others like Delegated Proof of Stake (DPoS) or Proof of History.