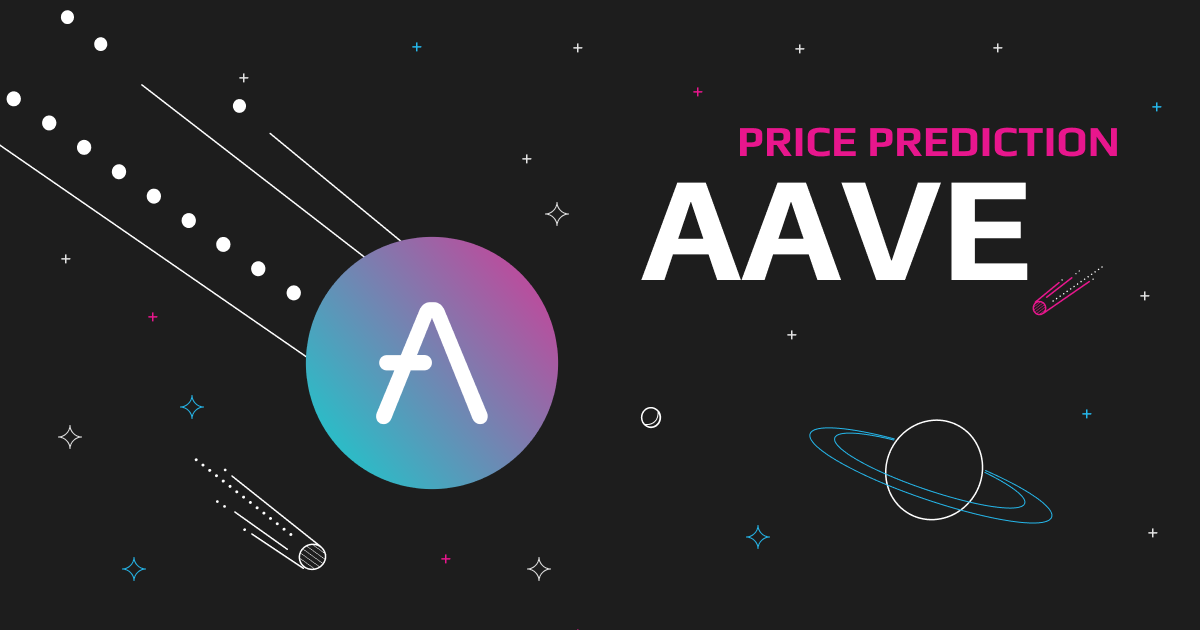 Aave (AAVE) is a decentralized finance (DeFi) money market platform that allows its users to borrow, lend and earn interest with crypto. The idea of a money market is nothing new in the traditional world of finance, but Aave is leading the charge to develop this space in the cryptocurrency market. This article will take a brief look at the tokenomics of AAVE and then cover Aave price prediction in the short, medium, and long term.

The network’s native token AAVE saw its price sky-rocket from around $30 when it launched in October 2021 all the way to $660 in May of the same year.

AAVE’s dramatic growth after it went public was not sustainable, and its price has been steadily falling since and trades below $200 as of writing. However, despite the recent negative trend, analysts expect the token to recover and break past its all-time high in the coming years, so is this the right time to buy the dip on AAVE?

What is AAVE Crypto?

AAVE is the native token that powers the Aave DeFi money market protocol that is governed by a decentralized autonomous organization (DAO). The project is in the top five DeFi platforms and has over $13 billion locked in its lending protocol, according to DeFi Lama.

AAVE is used to pay for transactions, vote on proposals in the DAO, and reward users for staking on the network.

How Many Aave Coins Are There?

AAVE is an Ethereum-based ERC-20 token with a maximum supply of 16 million tokens, of which 13 million are already circulating.

According to data from Etherscan, the largest AAVE holder is the wallet holding the stake AAVe accounting for 18% of the circulating tokens. In contrast, the second biggest holder is the AAVE reserve wallet.

No single entity or group appears to own a significant percentage of AAVE, and there are over 100,000unique token holders, which suggests a very high level of decentralization.

AAVE started 2021 on a highly bullish note going from $88 on January 1st to just under $300 by the 1st of February, according to data from CoinGecko.

The February spike pushed AAVE over $500, but this new all-time high was followed by a sudden move down, which reversed after hitting $308 in mid-March.

AAVE turned bullish after the March dip, and it hit a new all-time high of $631 in the second half of May, representing a 7-fold increase in its price from the start of the year.

Although the first half of 2021 was an incredibly successful period for AAVE, the second half was marked by a bearish trend, and by June, the token was trading below $200, and it finished the year around $230.

Can AAVE return to its all-time high? If the answer is ‘yes,’ then when can we expect it to happen? Let’s see what the analysts are predicting!

Out of all the investment assets on the market, cryptocurrencies are one of the most volatile due primarily to their infancy; therefore, forecasting their prices is a complex art. However, expert analysts using the latest technical and fundamental analysts can guide us on the future of this revolutionary technology.

Although analysts are a valuable source of information when thinking about investing in crypto, remember always to do your own research as well.

An uptick followed the March lows in AAVE’s price, and by early April, it had recovered above $250.

The first three weeks of April have not been kind to AAVE; its price dropped below $200, hit a monthly low of $157, and is now trading around $190.

According to analysts, the slight recovery in AAVE’s price seen in the second half of April is expected to continue throughout the year with an end of year target of over $230.

Aave’s DeFi potential has analysts excited in the mid and long term, which is why they expect 2023 to be a bullish year for the cryptocurrency.

In 2023 AAVE is forecast to break above $250 early on in the year and continue an uptrend, building towards the $300 mark. Some analysts expect AAVE to close out 2023 just below $300, while more bullish forecasts see it finishing just above it.

Investors that hold onto AAVE into 2025 are expected to be well rewarded for their faith in the network.

Predicting where a cryptocurrency will be by the end of the decade is difficult because of the number of variables that we simply can’t foresee arising; nonetheless, analysts expect the AAVE to close out the decade above $700, with some predicting it could end up over $1000.

Is Aave A Good Investment?

AAVE’s impressive DeFi potential and the fact that it’s currently trading over 70% below its all-time high certainly make it an exciting investment possibility. If the analysts are on the money, then investing in AAVE now could be a very profitable venture in the long term.

Although the future looks bright for AAVE, remember that investing in cryptocurrency is very risky always do your own research and don’t risk money you can’t afford to lose.

Aave Exchange: How To Buy Aave For ETH?

If you expect AAVE to return to its all-time highs, then you might consider adding the token to your portfolio in exchange for ETH. The best way to swap ETH for AAVE is to use an exchange aggregator like Swapzone.

Simply follow these steps to swap ETH for AAVE:

You’ve successfully added AAVE to your wallet at the best market rate!