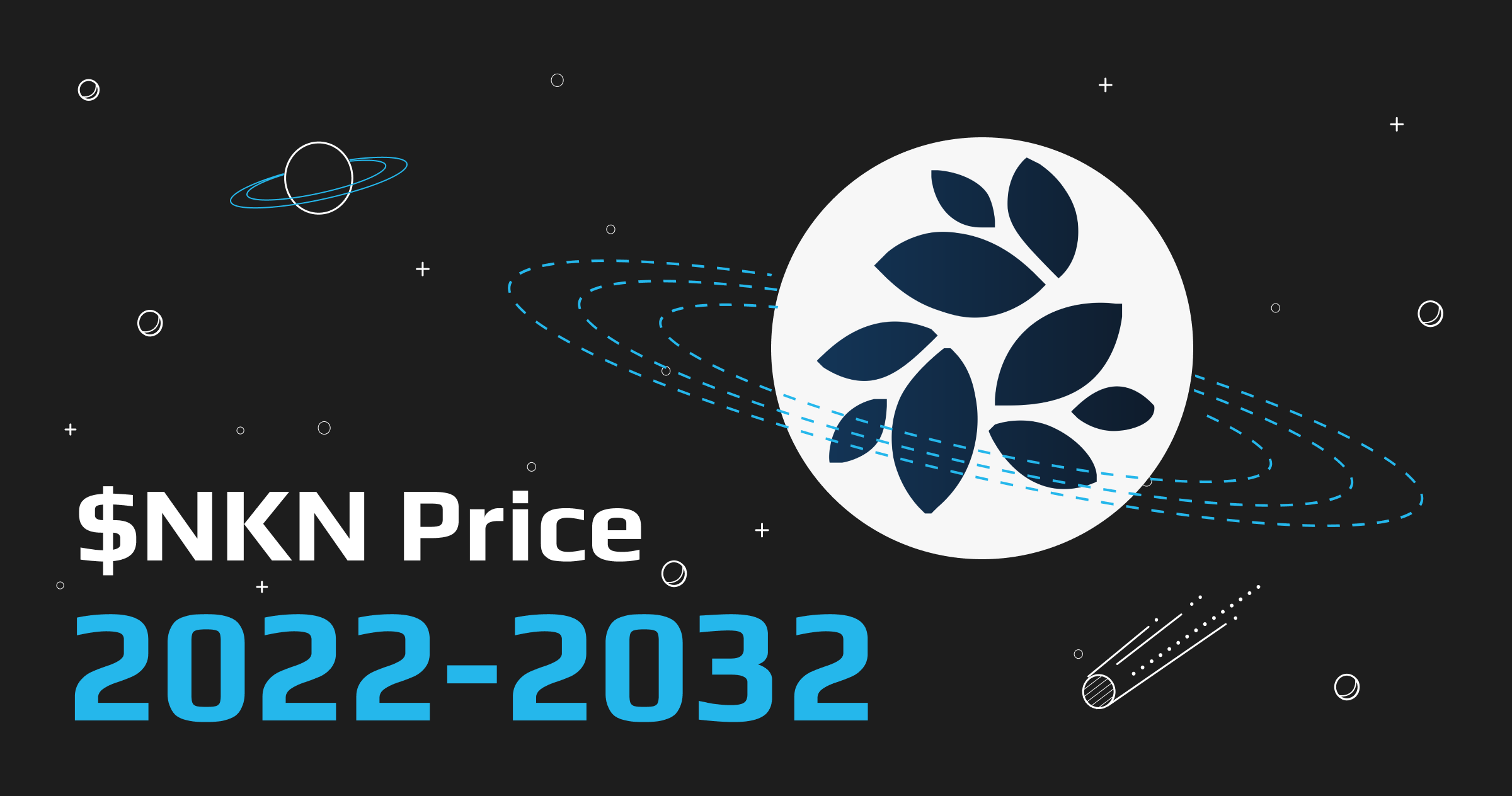 In this article, we will cover the short, medium, and long-term price prediction of the NKN token, which appears to be on the cusp of breaking its bearish trend and pushing back toward its previous highs.

The Overview of NKN

New Kind Of Network (NKN) is a super scalable blockchain platform with a very high level of decentralization that is operated using a proof-of-work (PoW) mechanism just like Ethereum (ETH) and Bitcoin (BTC).

NKN has embarked on the ambitious goal of building a new type of internet where the source code is truly open, and the community controls the direction of its evolution.

All the nodes on the network are connected and pass information between each other using end-to-end encryption, all without reliance on a central authority.

Not only has NKN provided the world with an alternative transaction system. It has also caught the attention of developers who have been launching dApps on the NKN smart contract compatible blockchain.

What Is NKN Crypto?

The NKN token is used to pay for transactions, governance, and rewards for the PoW miners who keep the network online are also paid in NKN.

The most successful smart contract networks, such as Ethereum (ETH) and Cardano (ADA), are only as successful as the dApps they run. NKN is no different from the big names in crypto, and an ecosystem of dApps has flourished on the network.

Surge Send: This dApp is a fully decentralized P2P file-sharing client that uses the NKN blockchain to send and receive files.

Nconnect: This dApp allows users to remotely connect machines without using a centralized server or a public IP address using end-to-end encryption on the NKN network.

NKN Tunnel: This dApp helps developers on the NKN network tunnel applications to the blockchain without using a central network while guaranteeing a high level of security.

NKN is a highly open network with an impressive level of security and performance, making it a favorite among dApp developers and people who simply want to perform high-speed transactions. In addition, NKN has some particular use cases that relate to its ability to resist cyber-attacks that often damage other blockchains and centralized networks; they include:

Now that we’ve looked at how NKN works, some of its dApps, and why it’s such a special project, we will dive into the NKN price predictions.

The cryptocurrency market has been extremely volatile in recent weeks. Still, there appears to be light at the end of the tunnel, and NKN has rebounded from lows more convincingly than most tokens. The experts are very optimistic about the future of NKN in both the short and long term. However, it’s crucial that you do your own research before investing.

NKN started 2022 trading at $0.3, but the bearish trend affecting the whole market dragged its price down quickly. NKN was trading below $0.2 by the end of January, at which point the price temporarily stabilized before tumbling below $0.1.

As of writing (13th May), NKN has lost 47% in the last seven days, but the trend appears to be reversing; in the last 24 hours, it has gained nearly 20% and seems to be forming an upward trend.

Analysts expect NKN to continue its recovery into the second half of 2022; conservative estimates expect it to trade around $0.1 by the end of the year, while more optimistic forecasts see it hitting $0.15

If the 2022 NKN recovery comes true, then analysts expect 2023 to be a year of slow but steady gains for the token with a maximum price target of just under $0.2 and a minimum target of $0.13. Therefore, NKN is likely to return 100% from its current price by the end of 2023.

With the next Bitcoin halving scheduled for 2024, this will be a big year for the market, and analysts expect the same for NKN. The minimum price of NKN in 2024 is forecast to hit $0.15, with a maximum price potentially moving above $0.2.

If you hold onto your NKN tokens into 2025, your portfolio could well be turning very green, with the token hitting a minimum $0.18 target and a maximum of $0.25.

If dApps continue to be built on NKN and the network maintains its stability, then significant returns could be on the cards by 2026. Lower forecasts see the token hitting $0.3, and maximum targets range between $0.4 and $0.55.

2028 will be when the chatter about NKN hitting $1 starts to feel increasingly realistic. According to analysts, the token’s maximum target will be just a couple of cents below $1 by the end of the year.

If everything falls into place for the project, then 2029 will be the year NKN hits $1 and potentially even moves above $1.5.

Holding NKN until the end of the decade will possibly reward you with massive gains as analysts expect the token to hit a minimum of $2 and a maximum of $2.3.

NKN is a project that’s so far slipped under most people’s radars, which on the one hand, has kept its market capitalization down, but it also creates an opportunity for us to buy low. Analysts can see the potential of the technology behind NKN and expect it to outperform the market in the medium and long term, which is why you should consider adding it to your portfolio.

⭐ How many NKN tokens are there in circulation?

According to CoinGecko, there are 650 million NKN tokens currently in circulation out of a maximum potential supply of 1 billion.

⭐ Is NKN a good investment?

Most analysts expect NKN to be an excellent investment in the long term due to its high probability of hitting several all-time highs in the next few years.

⭐ Where Buy NKN With Crypto With the lowest fees?

Swapping USDT or any other crypto for NKN through Swapzone is extremely easy and ensures that you pay minimal transaction fees by comparing 15+ exchange providers. Follow these simple steps to buy FLOKI with USDT:

Congrats, your NKN is now in your wallet!