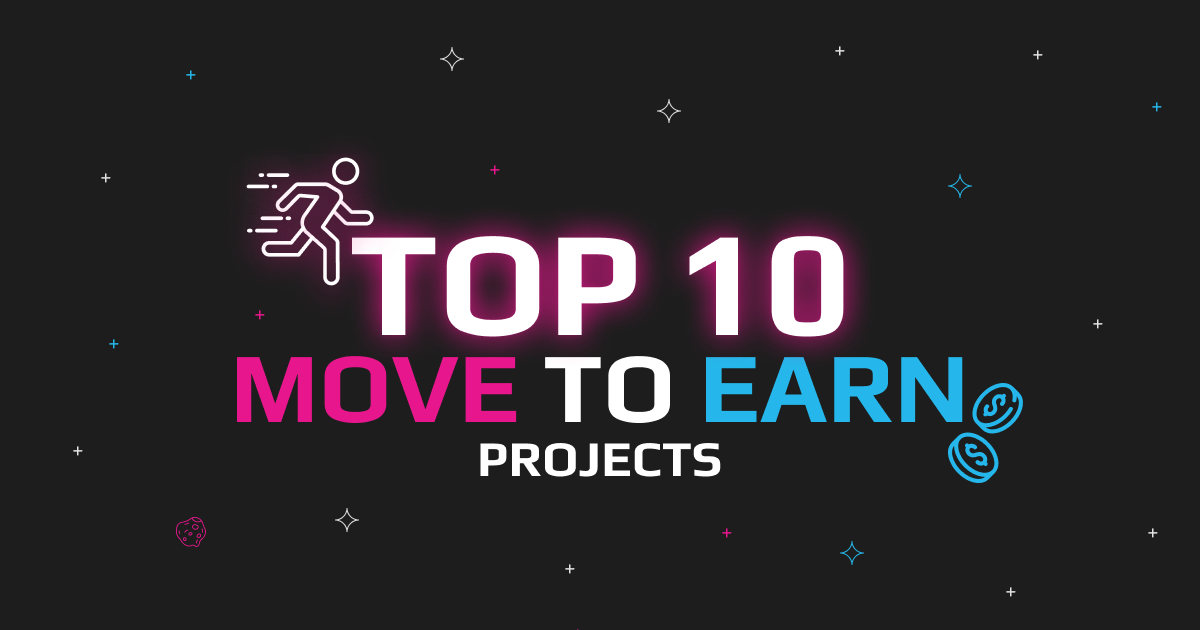 STEPN’s venture, M2E or Move-to-Earn projects, has revitalized the market recently and has become a trend. But, will the promise of Move-to-Earn crypto be fully realized, and will the community pay more attention to them? First, let’s look at this trend’s definition and top possible undertakings!

The Move-to-Earn app is a new trend that covers a wide range of products and services that reward customers for being active. They are platforms that reward users for staying active by allowing them to earn extra money by participating in their regular exercise routines or partaking in specific fitness-related contests. It follows the P2E trend of rewarding users in cryptocurrencies for playing these games.

What’s the Hype All About?

STEPN, a Solana-based game that allows users to purchase NFT sneakers to begin playing, generated a lot of hype around M2E. When people play the game, the app uses the GPS on their phones to track their movements and pays them with Green Satoshi Tokens, which are in-app tokens (GSTs). Users can then sell these tokens for USD Coin (USDC) or Solana (SOL) to cash out their profits. As a result, the Green Metaverse Token (GMT), STEPN’s governance token, has gone parabolic, appreciating 24,500% since its token sale on Binance on March 9.

Sequoia Capital and other Web3 investors have also backed STEPN and bought $5 million in GMT in a seed round in January. In addition, the world’s largest NFT marketplace, OpenSea, has also announced that it will now accept STEPN’s sneaker NFTs for trade. The NFTs are also the first Solana-based tokens to be supported by OpenSea, which previously only allowed Ethereum-based tokens.

The Move-to-Earn crypto projects, unlike play-to-earn programs, does not demand any prior investments. Instead, users are rewarded with money for walking, biking, or other modes of transportation. The more time spent moving, the more money one can earn. It’s a straightforward concept, and there are more projects in this space than one might believe.

While the Move-to-Earn concept is a niche market, it has value. For example, instead of sitting in a chair or lying in bed all day, people should move about more to improve their health. Paying people to move about is one technique to encourage them to do so. In addition, it is quite straightforward to keep track of activities and connect prizes for certain milestones using current technologies, such as counters for steps, augmented reality, GPS, and so on.

The Best Move-to-Earn Tokens to Watch

According to CoinMarketCap, the entire area has a market capitalization of $2.03 billion and a trading volume of over $1.15 billion. There are presently 12 cryptocurrencies in the area, with STEPN accounting for most of the capitalization at $1.93 billion, or slightly more than 95% of the total. Again, this demonstrates how new this industry is. Here are some of the best Move-to-Earn games and tokens to check out.

StepN, which debuted in early March, aims to connect consumers’ workout routines with the blockchain via NFT sneakers. One has to purchase a sneaker token corresponding to their usual running speed and fitness level and then run using geolocation on their phone. In addition, a runner can receive crypto awards by maintaining a consistent speed in line with the information provided on the token. A leaderboard is also used on the network, which allows for friendly rivalry and adds another layer of incentives.

Ready to enter the StepN universe? You can buy some GMT on Swapzone fast and safe.

DOSE is the utility asset of the OliveX ecosystem. This project uses blockchain and augmented reality technology to create a Metaverse fitness area that allows users to exercise without time or geography constraints. This Ethereum-based ERC-20 standard currency is used to reward gamers in the OliveX gaming ecosystem, such as Dustland Runners, 22 Pushups, and KARA Smart Fitness. Players can buy NFTs using DOSE tokens to participate in activities and game modes and unlock goods to make huge money.

The Dotmoovs network differs from other FitFi devices since it does not run as a primary M2E activity. Instead, the website aims to promote health through freestyle soccer and dance. Dotmoovs does not use geolocation technology; rather, it encourages users to get out of their seats and participate in European football. Users earn money on the network by using video cameras. Simply enough, one sets up their phone and engages in various tasks centered on stationary footwork skills such as ball juggling.

Genopets is a Move-to-Earn project that heavily invests in the Solana ecosystem’s GameFi component. It allows users to take part in the care and development of Genopet, the mascot they own. Genopets combines three game modes: Tamagochi nurturing and evolution, Pokemon training and battles, and Animal Crossing collecting and participation. Players must call Genopets and participate in Neon Genoverses before completing tasks and earning rewards. The governance currency in Genopets is $GENE, and $GENE holders can vote in-game matters and invest GENE to gain rewards. Furthermore, the Genopets project has strong backers, including Pantera Capital, Alameda Research, and Solana Capital.

The Move-to-Earn Step App is similar to StepN in that it requires players to own NFT to play the game. However, Step App turns exercise goals into money, fun, and friendly competition. The project had over 59,000 pre-registrations when it originally launched, indicating that people were eager to compete against one another on a global scale. Furthermore, the innovative Step App venture has been made available on both iOS and Android smartphones, with no restrictions on who can use it. The leading innovation in the metaverse, augmented reality, and blockchain, are used to power this project.

OliveX and its DOSE token are one of the most powerful FitFi cryptos since it connects M2E with the Sandbox, one of the largest metaverse places available (SAND-USD). The OliveX fitness metaverse is a section of the Sandbox metaverse. Users of the Sandbox can head here to take part in OliveX’s different workout challenges. People can earn DOSE tokens by participating in running challenges on the network, which they can do through geo-tracking.

Wirtual also promotes itself as a health/lifestyle app. On the other hand, its core product is completely different, focusing on a pay-as-you-go approach that allows customers to compete with one another on travel distance, speed, and other factors. You must participate in challenges such as jogging, cycling, and even swimming to earn $WIRTUAL tokens in this app. Users who do not have any $WIRTUAL have a daily earnings limit of 0.1 $WIRTUAL. You can unlock new levels by having more $WIRTUAL, which lets you earn more tokens.

DEFY is a play-to-earn NFT mobile game that uses the Polygon Layer 2 platform to allow users to earn real money while they play. The project is a game that blends casual code-breaking gameplay, learn-to-earn features, a Move-to-Earn system, augmented reality (AR), and real-world investigation to immerse gamers, or Operatives, in the metaverse that bridges the virtual and physical worlds. The game’s economic architecture is supposed to foster the recruitment of new operators, repetitive play, and user-generated content through active and passive earning mechanisms. This project blends Metaverse and Move-to-Earn, and it will resemble typical games like Pokemon Go, Zombie Run, and others. All of these games are visually appealing and have a significant player base.

Fitmint is a web-based fitness and lifestyle mobile app with built-in NFT gaming and social-media features that allow you to earn Crypto/NFT incentives simply by walking, running, or working out. Users first obtain an NFT in the form of sneakers and then earn in-game cryptocurrency by walking, jogging, or completing any other physical activity. This cryptocurrency can then be utilized for in-app activities or paid out for profit. This project is comparable to a previous version of StepN; however, it is still in the works.

Metz is a brand-new initiative that has received $700,000 in Community Funding. At the moment, not much is known about the project, but it appears that it will be similar to StepN and Genopets in terms of rewarding users with tokens and NFTs and fostering its NFTs (Metz). Because the project is currently under construction and will be completed in 2023, there are still plenty of investment prospects for everyone, including IDO, IGO, and Airdrop. In the future, we will update and study this project more thoroughly.