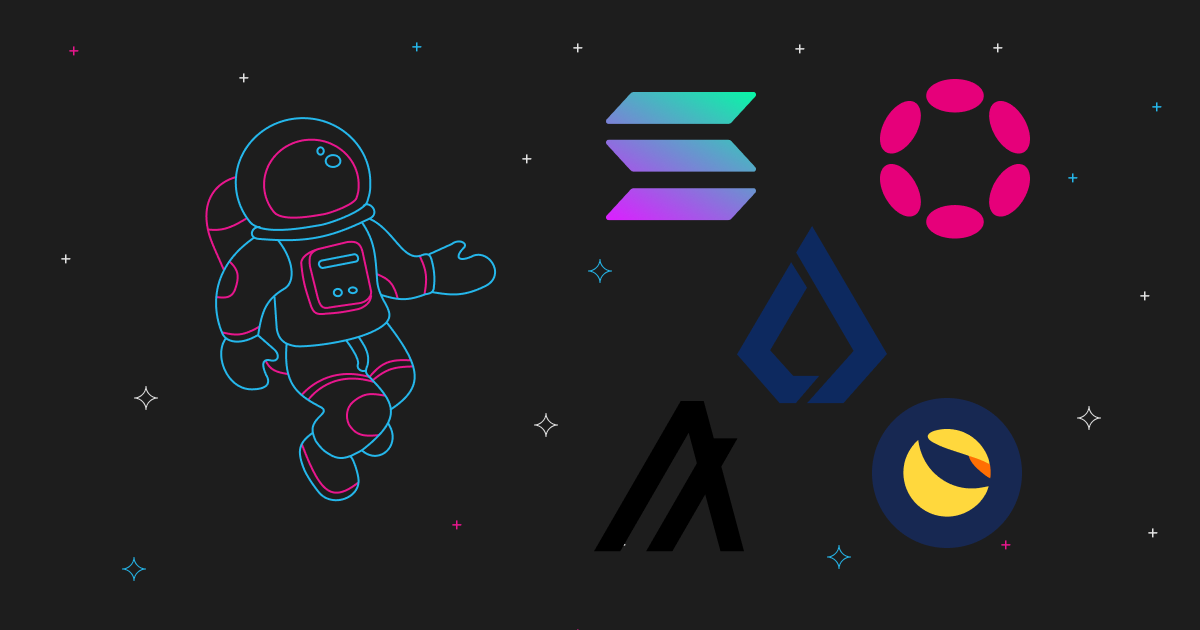 As more and more projects turn to the Proof-of-Stake algorithm for confirming crypto transactions due to a variety of reasons, it might get kind of hard to find what cryptos are the best to stake. There’s a multitude of parameters to keep at all times – so we at Swapzone decided to sift through the PoS coins on the market and offer you 5 cryptos to stake that we thought were most noteworthy for your consideration. Enjoy!

What does staking mean in crypto?

Staking is a method of confirming or validating transactions across several cryptocurrencies, allowing users to earn rewards for their holdings. But now, what does staking mean in cryptocurrency?

What is Cryptocurrency staking?

Cryptocurrency staking transfers your crypto assets to a blockchain network to support it and validate transactions. It’s compatible with cryptocurrencies that process payments using the proof-of-stake approach. Compared to the original proof-of-work paradigm, this is a more energy-efficient option. Mining devices that use computational power to solve mathematical problems are required for proof of work.

Staking can be a terrific way to earn passive money with your cryptocurrency, especially because some cryptocurrencies pay significant interest rates for staking. It’s crucial to understand how crypto staking works before you get started.

How does Cryptocurrency staking work?

Staking is how new transactions are added to the blockchain in cryptocurrencies that follow the proof-of-stake concept.

Let’s use Bitcoin as an example. New BTCs are produced and paid as staking rewards to the block’s validator every time a block is added to the network. The rewards are almost always the same type of coin that the players are staking. Some blockchains, on the other hand, use a different form of cryptocurrency as a reward.

For you to stake a cryptocurrency, the cryptocurrency in question must use or follow the proof-of-stake model. Then you can decide how much you would be willing to stake. Many popular cryptocurrency exchanges allow you to do so.

When you stake your coins, they remain in your possession. You’re effectively putting those staked coins to work, and you may unstake them if you want to exchange them. The unstaking procedure may take some time, as some cryptocurrencies require you to stake coins for a set time.

Solana (SOL) is an innovative contract platform based on the blockchain built explicitly for creating decentralized applications (dapps). Solana’s native SOL coin is a tradable token that can be used to pay for network fees and facilitate on-chain transactions.

Validators must run and maintain a validation node (known as a “Cluster”), requiring regular uptime and hardware that meets certain specifications. Slashing is a technique used by Solana to prevent validators from acting maliciously or performing poorly. Validators can collect commission fees from delegators to help pay the costs of operating a cluster.

How profitable is Solana staking?

Solana staking differs from other well-known PoS blockchains in that it employs a proof-of-history (PoH) consensus technique for timestamping. Solana achieves an incredible block time of 400 milliseconds by mixing PoS and PoH.

The annual inflation rate for SOL began at 8% but is now lowering by 15% every year until it reaches 1.5 percent

Terra‘s native cryptocurrency, LUNA, is an open-source, public blockchain platform that allows users to construct their stablecoins tied to various international fiat currencies. These stablecoins aren’t backed by fiat currencies; instead, they rely on algorithms and Terra’s LUNA token to maintain their value.

You can stake LUNA in two ways: a delegator or a validator. Delegating LUNA for staking rewards has no prerequisites and may be done directly in Terra’s native wallet, Terra Station.

Staking as a validator is a little more complicated, as it necessitates the installation of Terra Core software and the operation of a validator node. To be eligible for staking incentives, a validator must be among the top 100 in terms of tokens delegated. Terra features a six-second block time, which means you can win prizes every six seconds. The proposer is compensated if a specified number of validators confirm the block’s authenticity. Otherwise, that person’s investment may be forfeited. Validators are rewarded a percentage of every Terra transaction cost by the network.

How profitable is Terra Luna staking?

Staking benefits for Terra differ depending on whether you operate a validator or delegate your LUNA. While operating a validator is more complicated than operating a delegator, it is also more rewarding.

Algorand (ALGO) aims to solve the three main challenges faced by blockchains today: security, scalability, and availability. Algorand supports smart contracts and uses a pure proof-of-stake (PPoS) protocol built on Byzantine consensus. With this consensus, the network ties its security to the honesty of the majority. Each user’s influence on the choice of a new block is proportional to its stake (number of tokens) in the system. Users are randomly and secretly selected to propose blocks and vote on block proposals. Algorand makes any dishonesty impossible by a minority so any cheating by the majority would be foolish. As long as two-thirds of the majority are honest, the protocol is robust.

How profitable is Algorand staking?

In algorand staking, little or no action is required to start staking. You only need a minimum balance of 1 ALGO. Once your rewards are  claimed, they are directly added to your global balance. The Algorand network is also known for its speed. Hence, transactions are fast.

Polkadot (DOT) is a blockchain interoperability protocol that unites many chains into a single network, allowing for simultaneous transaction processing and data exchanges between them.

Polkadot proposed a non-probability proof-of-stake (NPoS) consensus mechanism that allows users to earn staking rewards by validating or nominating. Validators are in charge of validating transactions on the Polkadot network, while nominators guarantee that validators follow the rules.

For nominators, there is no minimum requirement for staking DOT, and no need to run a node or use specific hardware.

Earning staking rewards as a validator, on the other hand, is a little more difficult. The total DOT required to become a validator varies, but it usually takes around 350 to get started. Validators must additionally run a node, which usually entails launching a Linux cloud server.

At the start of a new era, or 24-hour period, rewards for DOT staking begin to accumulate. Your rewards from the previous era are available to claim at the end of each era. Typically, a validator or nominator will claim the staking rewards, causing all payouts to be immediately distributed to everyone else. Staking rewards can be claimed by both validators and nominators using the Polkadot JS wallet or Ledger.

How profitable is Polkadot staking?

The profitability of the nominator is determined by the validator. Validators can levy staking rewards commissions, which are subject to alter at any time. Furthermore, only the top 256 nominators of each validator are paid out at the conclusion of each era. Nominators share staking rewards evenly, regardless of the total amount of DOT staked with a validator.

Although rewards can vary significantly depending on era points, all validators share payouts evenly. Every era, era points are awarded for accomplishing specific beneficial tasks on the blockchain, such as making valid assertions for parachain blocks. Validators can earn additional prizes by receiving tips from DOT users. Validators receive 100% of the tips, which are utilized as an incentive for validators to prioritize specific transactions.

Lisk is a cryptocurrency that aims to act as a platform for decentralized applications (dapps), which are programs that run on a network of computers that are all running the same software.

Lisk, on the other hand, allows developers to construct custom dapps and cryptocurrencies using “sidechains,” which are separate blockchains that operate within the Lisk network. These side chains are linked to the Lisk blockchain and can be tailored to the demands of Lisk dapps.

Developers can use the project’s software development kit, code libraries, and coin, LSK, because these blockchains are interoperable with Lisk.

LSK is the cryptocurrency that powers the Lisk blockchain. It’s used to pay for key operations and vote on proposed changes to the software’s rules.

Lisk employs a consensus technique called delegated proof-of-stake to secure its blockchain and maintain its distributed network of computers in sync (DPoS).

To determine which machines running the program can build the next block on the Lisk blockchain, DPoS uses a real-time voting method. This means that anyone who possesses LSK can contribute to the network’s operation.

How to exchange these coins at the best rates?

Obtaining these coins at the best rates depends on the staking platform you choose. This is due to the fact that you will have to trust the platform to keep your tokens safe and to adhere to the rules of the staking agreement. Swapzone is one of the most accessible and user-friendly platforms to get the most profitable cryptocurrency exchange deals!

How to exchange your cryptocurrency on Swapzone