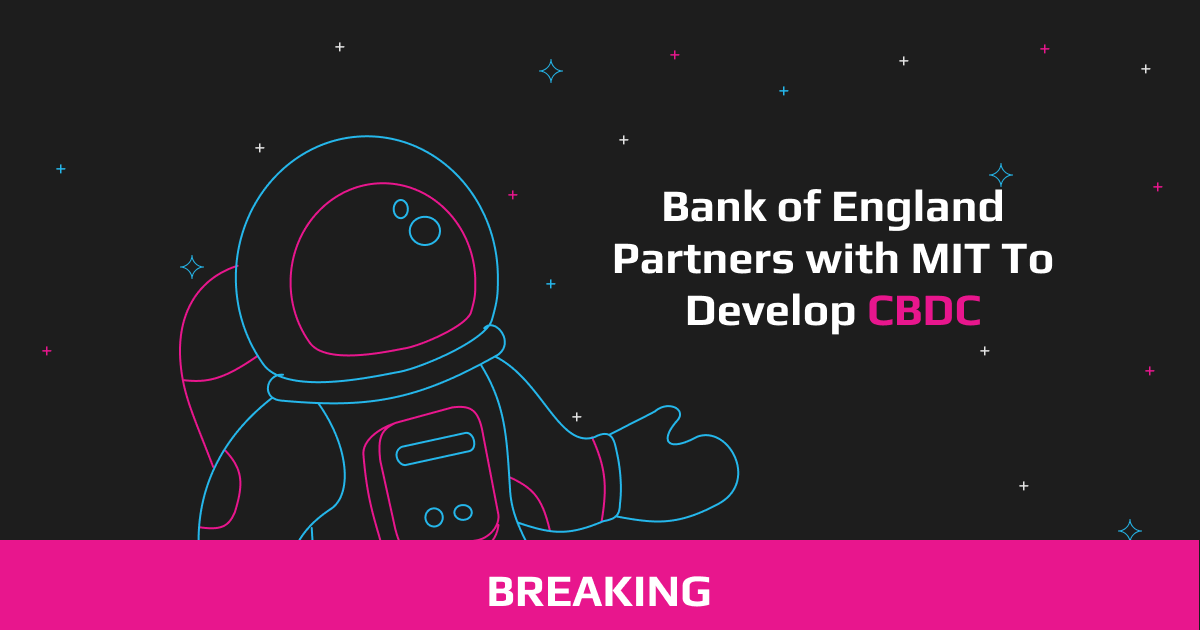 The Bank of England (BOE) has joined the growing number of central banks, exploring the possibility of launching a CBDC after partnering with the Massachusetts Institute of Technology (MIT) for a joint research project.

The twelve-month research project will explore the opportunities, risks, and challenges that introducing a Central Bank Digital Currency (CBDC) would entail in the United Kingdom.

The BOE added: “No decision has been made on whether to introduce a CBDC in the UK, which would be a major national infrastructure project. Undertaking this type of technical research will help inform wider policy thinking around CBDC.”

An update is expected from the BOE once the research project is concluded.

The announcement means that the BOE has joined the European Central Bank (ECB), the US Federal Reserve, and many other major central banks in exploring the idea of introducing a CBDC.

What is a CBDC?

A CBDC is very similar to stablecoins like USDT and USDC; they are cryptocurrency tokens that track a fiat currency. However, CBDCs are issued by a central bank, and their supply is controlled by the bank.

CBDCs are purely digital, which means they reduce the fees incurred by cross-border transactions and eliminate the third-party risk posed by institutions that operate between a central bank and citizens.

A CBDC builds a bridge directly linking the central bank and citizens, reducing the amount of expensive financial infrastructure needed to transfer money between the two parties.

Why are CBDCs Potentially Useful?

The primary goal of CBDCs is to increase financial inclusion, which involves reducing the number of people who don’t have access to a bank account.

This might seem trivial if you’re reading the article in a developed country, but in 20% of the world, people can’t access basic financial instruments, and even in the U.S, 5% of adults don’t have a bank account.

“If designed in a truly inclusive manner, a CBDC could help to provide a level playing field for every citizen to have equal access to digital payments and financial services.”, said Tanja Heßdörfer, Director of Business Development CBDC, at the banknote and securities company G+D.

A second important feature of CBDCs is that they leverage the security and speed of blockchain technology but don’t suffer from the volatility of the traditional cryptocurrency market.

One of the main differences between CBDCs and cryptocurrencies is their approach to privacy.

Major cryptocurrency networks such as BTC are decentralized, which means they aren’t controlled and monitored by a single person or institution. The privacy of cryptocurrencies is one of the main reasons they’ve become so popular.

CBDCs will almost certainly be closely monitored by the central bank that issues them, reducing the level of privacy they provide to users.

CBDCs weren’t on any country’s radar until a few years ago, but they’ve quickly gained traction, and several central banks have already launched CBDCs.

According to the Atlantic Council, 87 countries are exploring the use of CBDC, nine countries have launched their own CBDC, and 14 countries, including China and South Korea, are currently piloting CBDC projects.

Use Swapzone To Pick Up Some BTC

The future of money could be CBDCs, but for now, Bitcoin (BTC) remains the number one digital currency, and it’s had a strong seven days gaining nearly 15%. If you want to add some BTC to your portfolio Swapzone has got your back.

Let’s say you want to swap some USDC into BTC; simply follow these steps:

Great! You’ve added some BTC to your wallet at the lowest transaction fee on the market.