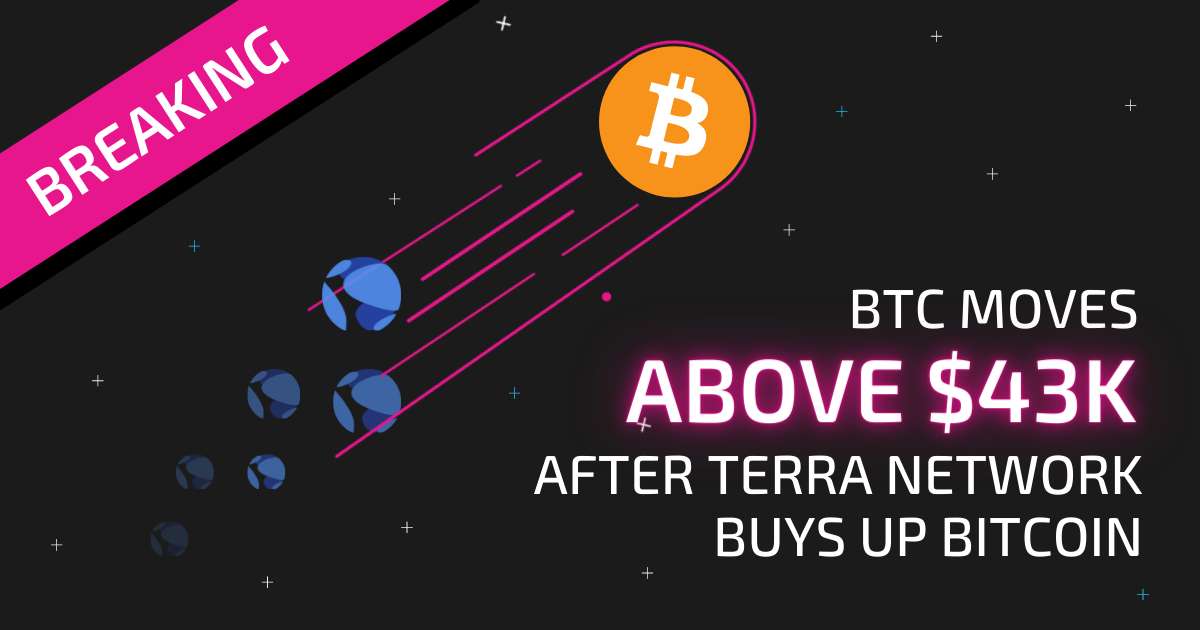 Bitcoin has broken above $43K and maintained an upward trend following news that the Terra Network invested millions in BTC.

The Terra network is a dual-network platform that’s home to both the LUNA token and the UST stablecoin family.

Terra has found itself in the spotlight among BTC investors due to the network’s plans to invest a whopping $10 billion in BTC to back its new USD stablecoin.

Do Kwon, Terra co-founder, Tweeted, “It’s not 10B today – as UST money supply grows, a portion of the seigniorage will go to build BTC reserves bridged to the Terra chain.”

He added: “We have 3B funds ready to seed this reserve, but technical infrastructure (bridges etc.) is still not ready yet.”

It isn’t clear exactly how much of the $3 billion has already been purchased by Terra, but the Telegram channel WhaleAlert noted various $100 million UST transfers to centralized exchanges such as Binance.

As is often the case when BTC moves, it’s followed by alt-coins, ETH, SOL, and BNB are up over 2% in the last 24 hours.

Cardano (ADA) has outperformed all other major alt-coins, having spent weeks languishing below $1. ADA has broken above the psychological barrier following a near 20% increase in the last 24 hours.

Although Terra is being held up as the primary driver of BTC’s positive move, the network’s native token LUNA hasn’t made a major move.

Kwon doesn’t appear to be too concerned with LUNA’s short-term reaction to the BTC buying spree; instead, he’s focusing on Bitcoin, judging by a Tweet from him today that read: “Please short #btc.”

Why Is Terra Buying So Much Bitcoin?

Bitcoin is often talked about as digital gold because its supply is limited to 21 million, giving it a deflationary nature.

The Terra team decided that the best way to ensure the price stability of the network’s UST stablecoin was to back its value using a huge BTC reserve.

According to Kwon, the BTC reserve will be used to prevent short-term redemptions of UST, therefore guaranteeing the stablecoins all-important ‘stability.’

For now, Kwon hasn’t given a date for when Terra will purchase the next batch of BTC, but if he does make an announcement, we can expect it to come through his official Twitter account.

Use Swapzone To Pick Up Some BTC

Terra has only just started buying BTC, with billions of dollars earmarked for future prices; this could be the first of many Terra-induced BTC pumps. If you don’t want to miss the next move up, this could be an excellent time to add some BTC to your wallet with Swapzone’s help.

Let’s say you want to swap some USDC into BTC; simply follow these steps:

Good work! You’ve added some BTC to your wallet at the lowest transaction fee on the market.