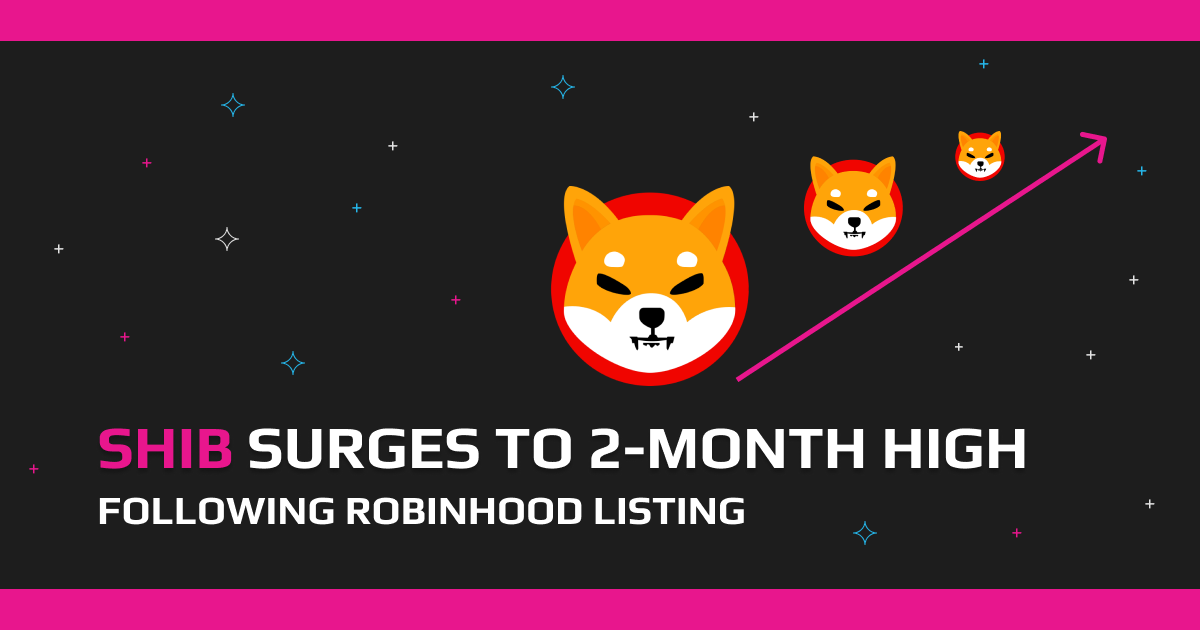 The legendary dog-themed meme coin Shiba Inu has surged to a two-month high after the Robinhood trading platform listed the token; meanwhile, Bitcoin continues to struggle.

Shiba Inu (SHIB) skyrocketed above its two-month $0.00003 high after the stock and crypto trading platform Robinhood announced that it would list the token.

According to Statista, Robinhood has over 20 million active users. The prospect of these investors buying up one of Elon Musk’s favourite cryptos pushed SHIB’s price beyond several short-term resistance lines.

Attention was first drawn to the listing following a Tweet yesterday, 12th April, from Cryptocurrency Alerting, a live crypto exchange monitor, which stated: “We’ve detected that SHIBA INU $SHIB has been listed on Robinhood!”

Despite the good news for SHIB holders, the rest of the cryptocurrency market, including the OG token Bitcoin (BTC), has been suffering consecutive red days.

Green SHIB In A Sea Of Red

SHIB’s spike has cooled off since yesterday as traders moved in to take profits following the spike; nonetheless, the token is up around 7% in the last 24 hours and over 20% on the monthly chart, according to CoinGecko.

BTC has been struggling after it failed to break above the $47K resistance line last week; as of writing, BTC is trading below $40K and is down over 12% in seven days.

BTC did bounce off its multi-week low of $39k yesterday, but since then, the bears appear to have retaken control as price action continues to form negative patterns.

BTC isn’t the only major cryptocurrency experiencing selling pressure over the last seven days. Ethereum (ETH), Ripple (XRP), and Solana (SOL) are down 11%, 13%, and 19%, respectively.

SHIB wasn’t the only token to be added to Robinhood; users can now trade Solana (SOL) and Polygon (MATIC).

Speaking at the 2022 Bitcoin Conference, Aparna Chennapragada, Robinhood’s chief product officer, revealed that they would be adding the Bitcoin Lightning Network to the platform.

The lightning network is a layer-2 solution built on the Bitcoin network, which will make transactions faster and cheaper, which could increase the adoption of BTC as a payment solution.

Robinhood stated in an official blog post that: “Enabling send and receive functionality is just the first step in an exciting journey for Robinhood Crypto.

We’re building to enable customers to do more with their wallets and reduce cost wherever we can when they interact with the crypto ecosystem.”

According to Robinhood, over two million WenWallets (the site’s crypto wallet) were activated last week alone.

Vlad Tenev, Co-Founder of Robinhood, said: “Our goal is to make Robinhood the most trusted and easiest to use crypto platform.”

Pick Up Some SHIB With Swapzone

If you expect retail investors to flood into SHIB now that the token is listed on Robinhood, you might consider adding the meme coin to your portfolio – Swapzone can help you with these transactions.

For example, if you want to get into SHIB before the retail investors on Robinhood, you can swap some USDC for SHIB; follow these steps:

Well done! Some SHIB is on its way to your wallet!