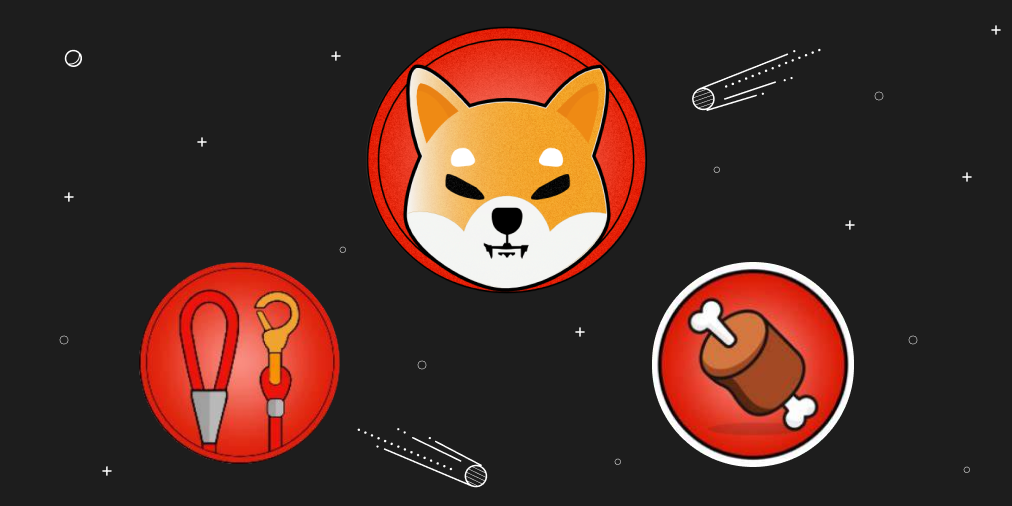 Meme cryptos like SHIB can be described as cryptocurrencies often related to some joke, theme, or popular trend. DOGE was the first meme coin to be ever created back in 2013. Its name was derived from the popular Shiba Inu dog meme that dominated the internet then. The coin started as a mere joke but it’s now one of the most successful cryptos.

The explosive growth of Dogecoin and the increase in crypto adoption globally have sent the crypto market booming with meme tokens like SHIB, LEASH, BONE. However, these tokens aren’t just mere memes already. With the mass adoption happening all around, you can see these three on exchanges and easily pay in the shops with them.

However, several people claim that the rise of memecoins was a result of Elon Musk’s apparent affiliation and interest in Dogecoin. Now, we suggest you discover the SHIB ecosystem that has gained immense popularity not only because of its initial meme nature but also because of the immense work carried out by the team and community. Let’s learn about SHIB, LEASH, BONE!

Shiba Inu, otherwise known as SHIB is a token developed as an Ethereum-compatible alternative to DOGE. The SHIB token was created with an initial circulating supply of about 1 quadrillion coins, which is subject to burns, making it a deflationary token, unlike DOGE. The SHIB ecosystem also supports innovative projects like the NFT art incubator and a decentralized exchange “ShibaSwap”.

As said earlier, Shiba Inu was designed as an ERC-20 token developed on the Ethereum network by an anonymous person called “Ryoshi”. According to Shiba Inu’s website, the project is described as a meme token growing into a vibrant ecosystem. The SHIB token is also the first coin of the great triumvirate of the Shiba Inu ecosystem.

The second token of the great triumvirate of the Shiba Inu ecosystem is the LEASH token. LEASH is also termed the Doge Killer.

Shiba Inu’s LEASH token was initially launched as a rebase token before altering its use case to strengthen its ecosystem range. Unlike SHIB, the LEASH token was developed with a limited supply of 100,000 tokens. These numbers make it more appealing to the public due to scarcity driven in part by the burning of the LEASH tokens. .

Users are rewarded with xLEASH tokens for staking LEASH. Logically, users that hold xLEASH tokens are part of the xLEASH liquidity pool. The reward of being part of this pool is to receive 0.5% of all BONE tokens per block. Furthermore, users digging or providing liquidity with LEASH tokens are entitled to get a share of the LEASH-ETH SSLP.

BONE is the governance token of the ShibaSwap ecosystem and the third token of the great triumvirate of the Shiba Inu ecosystem. With BONE, the SHIB community is able to vote on upcoming proposals and innovations. The number of BONE tokens in a user’s possession determines the weight and influence of the user’s vote.

BONE was developed with a total supply of 250,000,000 tokens. It was also perfected to fit between the previous two tokens, SHIB and LEASH, in terms of circulation supply. Burying BONE earns the user a certain amount of tBONE.

Possessing tBONE tokens means the holder is entitled to be part of a pool responsible for providing members with 1% of all BONE per block. Digging on the other hand has a similar function to that of LEASH tokens. Finally, the user digging or providing liquidity receives a portion of BONE-ETH SSLP.

How are these 3 cryptos related?

Apart from being part of the wider Shiba Inu ecosystem, another thing that relates SHIB, LEASH, BONE together is ShibaSwap.

One of SHIB token’s objectives was to develop the ShibaSwap (a Shiba Inu exchange platform). ShibaSwap acts as a decentralized exchange that operates as a p2p kind of platform just like other DEX such as Uniswap.

For example, Uniswap allows users to trade SHIB tokens and other cryptos without the support of an intermediary company. Such functions allow ShibaSwap users to supply liquidity and stake tokens to earn interest using SHIB, LEASH, BONE.

SHIB has embraced a different way of doing things ever since the launch of the Shiba Inu ecosystem. Some of these concepts include the astronomical supply of 1 quadrillion, and the Founder “Ryoshi” locking 50% in Uniswap. Half of the total supply was also burnt to the Ethereum co-founder “Vitalik Buterin” for safekeeping.

Vitalik Buterin was said to have donated SHIB to help curb the overwhelming spread of Covid-19 in India. This event was recognized as the largest crypto donation in the history of cryptocurrency. Vitalik Buterin also ensured the successful burn of 40% of the total supply to a dead wallet.  Ryoshi made a statement in which he said “Thank you to the woofmeister for enabling true decentralization. Now we truly begin”.

The combination of SHIB, LEASH, BONE results in the creation of ShibaSwap, and it is the next step in the evolution of DeFi platforms. One of the features of the Shiba Inu exchange “ShibaSwap” is the provision of Users’ ability to DIG (provide liquidity), BURY (stake), and SWAP tokens to receive WOOF returns.

The Shiba Inu exchange platform provides the ShibArmy community with access to upcoming NFTs like Shiboshis and additional features like portfolio trackers to create easy navigation around the crypto world. The Shiboshis NFTs are 10,000 lovable Shiba Inu NFTs, which are set to be converted and usable in the upcoming Shiboshis game.

The Shiba ecosystem is not limited to just the three tokens that we have discussed above, there is more. The Shiba Inu Games is coming and its first version is already being worked upon. The Oshiverse, which is the game codename, will host 10,000 unique Shiboshis characters that will be playable in the Shiboshis game. The released Shiboshi sets can be upgraded through power-ups and you can even rename your Shiboshis from the default name for a certain amount.

Initially, the game will be built as a mobile game. Furthermore, the game will be hosted exclusively on the upcoming Shiba blockchain called Shibarium. This will allow the development team to add several decentralized features to improve the game for mobile.

Something exciting is gaining steam in the Shiba ecosystem. Do you know what it is? Well, glad to inform you that Shiba will have its own blockchain network that will be called Shibarium. This blockchain is going to be unique and nothing like the centralized Matic ecosystem. So, discard the rumour that SHIB token is partnering with Matic to build Shibarium.

Shibarium is going to use the BONE token as its main token pair. This is to give everyone a fair start and rest any concerns regarding Whale Bags if the SHIB token is used. However, the good news is that LEASH and SHIB holders can use their holdings to yield BONE tokens during the launch of ShibaSwap. This will prove useful for the coming of the Shibarium blockchain. Once the Shiba blockchain is built, it is up to the Shiba community to check if the blockchain is well decentralized.

How to exchange SHIB and LEASH at the best rates?