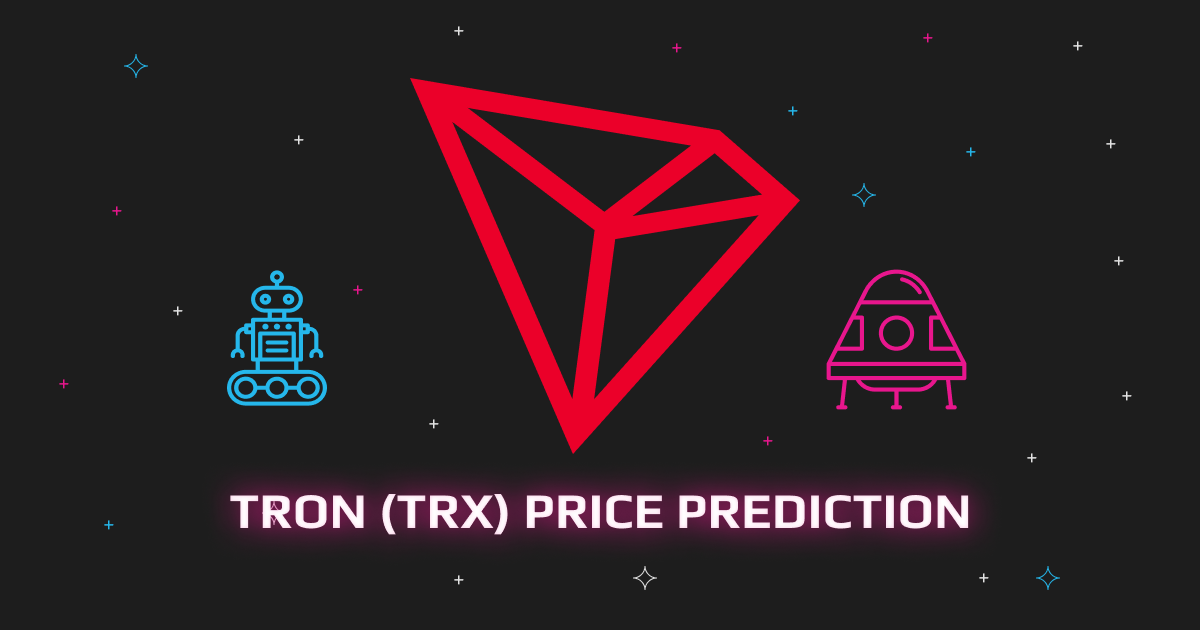 The native TRON cryptocurrency that DAO issues is called TRX. On the blockchain, TRX is used to power transactions and apps. TRX can also be used to buy any TRC-based token that has been released on the blockchain. This article details what we feel is the most likely price trajectory for TRX over the next few years in our TRX price prediction.

TRON was launched in September 2017 by Chinese entrepreneur Justin Sun, who formerly served as the Greater China region agent for the Ripple cryptocurrency XRP. The TRON network, which is decentralized, centers on file sharing and entertainment content. The TRON blockchain was launched in June 2018. In July of that year, it merged with BitTorrent, a peer-to-peer file-sharing network. Let’s have a quick project overview before digging into TRON price forecast.

The presence of TRX is required for all of the Tron ecosystem’s technology. The token serves as a fundamental unit for all accounts created on the Tron network. When other tokens are kept in a Tron wallet, each token’s worth is determined by the current value of TRX.

The Tron ecosystem consists of a sophisticated and secure wallet application, and this is also one of the most well-known dApps associated with the platform. Users that want to buy, sell, or store TRX can do so through the system’s wallet. Alternatively, several mobile wallets have begun to offer support for TRC tokens, including TRX. Specific hardware wallets may also store TRX tokens, giving added protection, especially if you own a large amount of TRX.

When TRX first launched in late 2017, it was an ERC-20 token on the Ethereum blockchain, but when it went live in June 2018, it was transferred to the TRON mainnet. The TRON DAO has burned 99.2 billion ERC-20 TRX tokens, or 99.19 percent of the total supply.

TRON is also working on non-fungible tokens (NFTs) in metaverse games. For example, Bunny Planet is a metaverse gaming project developed on the TRON blockchain, similar to Cryptokitties and Axie Infinity on the Ethereum blockchain. Bunny Planet held an NFT giveaway from the 14th to the 16th of February to promote the game.

2020 was a good year for cryptocurrencies such as TRON. The year 2021 began with a consolidation that lasted until February. The price rocketed further after the consolidation period to set a high for the year at $0.166 in April. The rest of 2021 was not as bullish, but the price remained stable above $0.081. However, the coin closed the year at around the $0.076 mark, this was lower than many analysts projected, and it was the opposite of the coin’s predicted stability.

TRON has a very vibrant and supportive community. TRX has a bright future, perhaps even more optimistic than previously thought, based on core principles. Thanks to a planned roadmap and backing from the gaming and gambling industry, the project’s future looks promising. The area covered by Tron (TRX) is constantly growing and has a lot of financial resources.

TRX is heavily reliant on the market for decentralized apps (dApps). Therefore, all price forecasts are predicated on two other assumptions: the market’s future financial performance and TRON’s competitors’ chance of success.

TRX is predicted to grow slowly but consistently, according to TradingBeasts’ price projection. The current TRX coin price is $0.06125. However, the average price for TRON is predicted to be $0.0775 by the end of 2022.

According to TRON’s price forecast and technical analysis, the TRX price is predicted to cross an average price level of $0.085 in 2022, with a minimum price value of $0.082 expected by the end of the year. TRX is also capable of reaching a maximum price of $0.098.

According to the TRX price prediction and technical analysis, the TRX price is predicted to cross an average price level of $0.28 in 2025, with a minimum price value of $0.26 expected by 2025. Furthermore, TRX has the potential to reach a maximum price of $0.30 in 2025.

According to the TRX price prediction and technical analysis, the TRX price is predicted to cross an average price level of $2.95 in 2040, with a minimum price value of $2.57 expected by the current year. TRX is also capable of reaching a maximum price of $3.43.

However, as we move further into the future price predictions, the predictions become less reliable.

Is TRON a Good Investment?

In today’s volatile cryptocurrency markets, it’s critical to conduct your research on a coin or token to determine whether it fits your investment portfolio based on your risk tolerance and the amount you intend to invest.

On the other hand, TRON appears to be a good investment with enormous potential. TRX has risen 3,307.1 percent since its all-time low of $0.00180434. Its current move toward decentralization in 2022 is also viewed favourably by the asset.

Will Tron Ever Reach $1?

Where Can I Buy TRON Cryptocurrency At The Best Rate?

There are a few options for getting the best rate when purchasing TRON (TRX). The most common approach is to use a TRX-enabled exchange. You can quickly convert TRX by using one of the many instant cryptocurrency exchange providers listed on Swapzone.

On Swapzone, you can easily convert TRX using a wide range of instant cryptocurrency exchange providers listed. You can review these supported exchangers, offers, and exchange rates.

To avoid complications, read their KYC/AML policies and community reviews. Ensure that fees are included in the estimate when making crypto-to-TRON or TRON-to-crypto transactions.

Steps on how to buy Tron (TRX) on Swapzone: