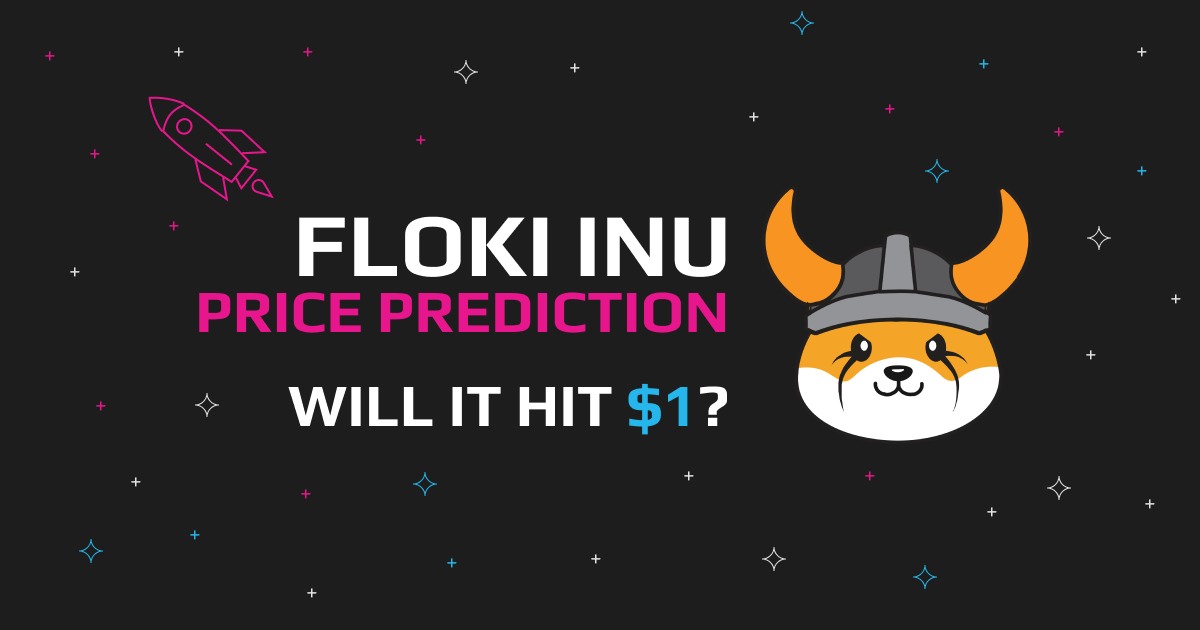 Floki Inu (FLOKI) is an Elon Musk-inspired Viking-dog-themed token that launched last year. Hearing the words ‘Elon Musk’ and ‘Dog’ in the cryptocurrency sphere is becoming somewhat repetitive, but this token claims to be more than just a copy of previously successful meme tokens like Shiba Inu (SHIB) and Doge Coin (DOGE). That’s why it seems so exciting to see what Floki Inu price prediction has in store for us.

The Floki develoeprs have big plans; they intend to make significant donations to charity using the profits from the project, break into the NFT market and explore opportunities in blockchain-based gaming.

FLOKI is currently trading 95% below its all-time high, making this the opportune moment for any potential dip-buyers to find out if the experts are forecasting new all-time highs for this token.

Before we dive into the Floki forecasts, we’ll briefly look at the project’s tokenomics.

What Is Floki Inu?

The FLOKI token is named after a dog in the hit tv series ‘Vikings’ and launched in July 2021 and leveraged the love of dog-themed coins on social media to gain popularity in the crypto community.

FLOKI is an ERC-20 Ethereum-based token with a maximum supply of 10 billion, of which 9 billion are already in circulation, according to CoinGecko.

If you are looking for an in-depth guide on the Floki project, take a look at this “What is Floki Inu” blog post.

Floki Inu Price Prediction 2021: How Was It?

FLOKI launched in July with a price of $0.000001, and it traded flat for the following few months until the project started to gain popularity on social media in August.

FLOKI slowly started to rise in August, and by the end of October, it reached $0.000006, meaning nearly 6X from its launch price. The token went parabolic at the end of October as the trading volume spiked and FOMO took over; it hit $0.0002, knocking several zeros off its price tag.

In 2021 FLOKI made a lot of investors a serious amount of money, and interestingly its chart looks very similar to SHIB.

Both SHIB and FLOKI experienced a massive rally in October which is probably as the tokens are similar in terms of marketing, when one spikes, the other is likely to follow.

Not only did both tokens start to spike at the same time, but they also peaked in November, and they followed an almost identical downward trend in December.

The tokens both ended 2021 higher, but well below the prices they reached in October and November.

Here you can see a real-time chart of Floki Inu coin price in USDT.

Predicting the future of meme coins is no simple matter, as social-media hype often dictates which way the market will turn. Luckily the experts have taken a good look at this token, and some of them expect to perform strongly in the coming years.

FLOKI has started 2022 badly, to say the least, it was trading at $0.00001 in early January, and it has been in a downward trend for the last three months, resulting in a 50% price drop.

By the end of April, FLOKI was down to $0.00001, and the bearish trend continued into May, although a glimmer of hope appeared on May 4th when FLOKI spiked by over 7%.

Following the May price spike, some FLOKI holders hope that the downward trend has finally been broken.

Analysts are bullish on FLOKI for 2022. The majority of them predict that the token will continue to move higher and return over 50% from the current price by the end of December with a price target of around $0.00003.

The experts expect the 2022 bullish trend to continue towards the middle of the decade with an average price target of $0.00005 for early 2025.

The average price of Floki will continue to grow throughout the year reaching a maximum price of $0.00007 by September and potentially hitting $0.00008 by the end of December.

Even the most modest price predictions for 2025 suggest that Floki will return upwards of 200% from its 2022 price.

If you’re confident about FLOKI’s future, you might be thinking about holding the token until the end of the decade; many analysts think this could be a smart move. By 2030 FLOKI is expected to be trading at an average price of $0.0006 and a maximum of $0.00085.

It’s worth noting that some analysts such as CryptoCurrencyPrediction.com are very bullish on the token and see it trading at $0.003 in 2030.

Reddit is normally buzzing with the hype around Elon musk tokens, but Floki Reddit friends are currently pretty hostile places. Most users have said that it’s just another meme coin with very little value and no real future while others described it as a pump and dump scheme.

Is Floki a Good Investment?

Investing in meme coins is a risky game, but it has made people who get in at the right time the sort of returns traditional stock investors could only dream of. If you think Floki could pump at least once more, then it might be worth a shot but always remember to do your own research and only invest what you can afford.

With a dog-themed token, you should never say never. People were laughed at for buying SHIB and DOGE early on. However, it remains very unlikely that Floki can hit $1 as it would require its market capitalization to increase by an eye-watering amount.

How To Buy FLOKI With Crypto?

Swapping USDT or any other crypto for FLOKI through Swapzone is extremely easy and ensures that you pay minimal transaction fees by comparing 15+ exchange providers. Follow these simple steps to buy FLOKI with USDT: