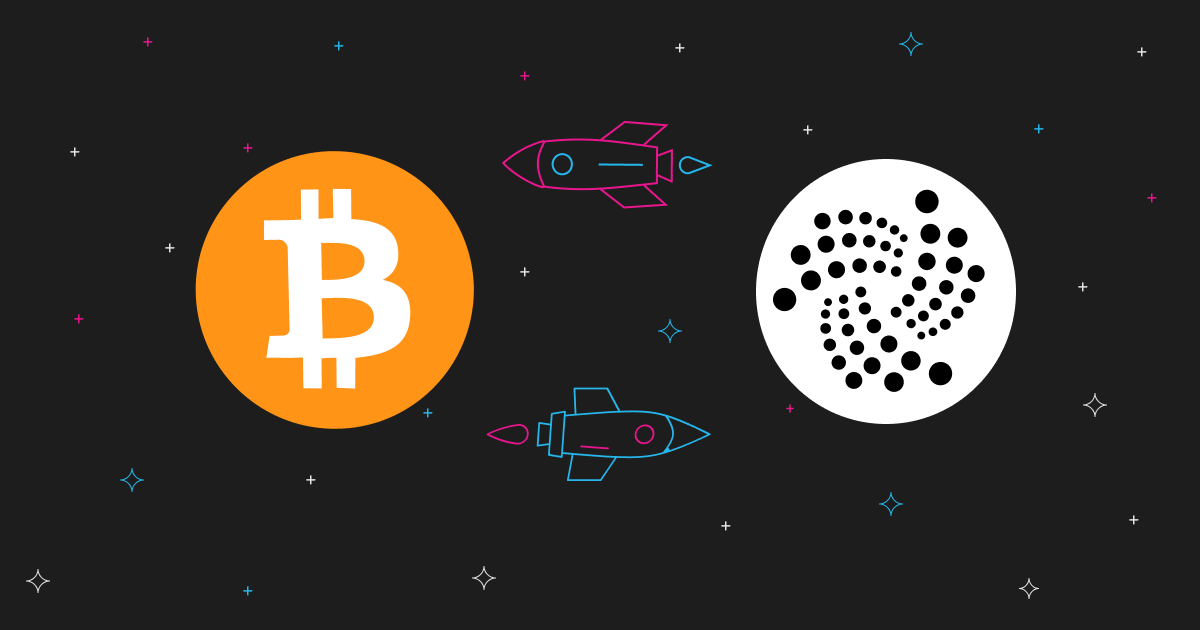 Introducing the next-generation open-source scalable distributed ledger, IOTA. IOTA was developed to ensure a seamless transfer of data and value, and built for the next step of the digital revolution “The Internet of Things”.

The Internet of Things (IoT) itself is designed to ease the exchange of data and value between machines and humans. IOTA features a feeless transaction, tamper-proof data, and low-resource requirements. Furthermore, the IOTA network can power the Internet of Things tech without any hiccups or heavy investment in infrastructure.

This is quite different from Bitcoin, which is primarily designed as a medium of transaction and store of value. So, what is IOTA? How does the MIOTA coin differ from BTC?

The IOTA (MIOTA coin) network functions as a distributed ledger designed to perform transactions between machines and devices in the IoT ecosystem at the same time recording each transaction. The IOTA ledger is powered by its native token (MIOTA coin), accounting for transactions in the IOTA network.

IOTA takes pride in its key innovation “The Tangle”, which is a system of nodes that confirms transactions.  In addition, IOTA describes Tangle to be faster and more efficient than regular blockchains in the crypto world.

IOTA is managed by the nonprofit IOTA Foundation and it has secured agreements with prominent and big companies like Volkswagen and Bosch. The purpose of the deal is to extend the platform’s use case and utility.

MIOTA coin has proven to be exceptional in many areas such as the IOTA’s Tangle technology that avoids fitting transactions into blocks while eliminating mining activity. With this change in direction from conventional blockchains, the execution of transactions per second has trippled with lower demand for electricity as computing power needed is low.

Users can now make limitless micro-transactions with no fee, thanks to the possibility of using low computing power to accomplish the transaction confirmation process.

Another key feature of the IOTA’s tangle is the unique quality of its data structure that enables transactions to run parallel to each other. This means you can perform unlimited transactions without crashing the IOTA network unlike conventional blockchains that do not allow parallel addition of transactions, which makes scaling difficult to achieve.

Due to IOTA’s avoidance of blocks and miners, the IOTA network has become light enough to run on devices with low computing power. This means a personal computer can be used to run an IOTA node without any hiccups.

How to convert BTC to IOTA?

FAQ about IOTA vs Bitcoin

Why IOTA is better than Bitcoin?

IOTA’s many solutions to Bitcoin’s issues lie in eliminating numerous vital concepts and topographical constraints of the traditional blockchain network. For instance, IOTA native cryptocurrency “MIOTA coin” is pre-mined while the consensus of transactions is done differently to the way it is done on a blockchain network. One of IOTA’s many plans is to construct a new data structure known as Tangle. Tangle will function as a system that organizes numeric representations within a computer’s memory.

In other words, Tangle is described as a Decentralized Acyclic Graph (DAG), which is a non-sequential system of nodes. This means each node can be connected to several other nodes in a Tangle. Furthermore, the nodes can only be connected in one direction, making it impossible to refer back to themselves.

As we examine why IOTA is better than Bitcoin further, it is necessary to know that a standard blockchain is also a Decentralized network but it is sequentially connected, unlike IOTA’s Tangle. IOTA’s Tangle parallel system allows simultaneous processing of transactions instead of sequential. The bulkier Tangle becomes the more secure and efficient it is at processing transactions.

If we recall, Bitcoin operates with a group of systems operating the entire nodes, containing the whole transaction history for the purpose of consensus and transaction confirmation. However, this consumes a lot of energy and requires intensive computational power.

In Tangle, full node miners are not necessary. New individual transactions are confirmed by referencing the two previous transactions. This reduces the amount of time and memory required to confirm each transaction. The final step of transaction confirmation is a little addition of a direct Proof-of-Work puzzle that is easily solvable.

The two chosen previous transactions are described as tips, in which the IOTA’s network uses a tip selection algorithm with what is called “confidence” as a measure to approve the transaction. For example, a transaction approved 98 times previously has 98% confidence that it will be approved by a node in the future.

Naturally, it doesn’t look like IOTA was ever designed to replace Bitcoin given that they serve different interests. So, the idea of “will IOTA replace Bitcoin” seems far-fetched. IOTA primarily focuses on the Internet of Things network and IOTA is not a traditional blockchain that requires miners to validate a transaction by solving an issue. The IOTA is designed to run on Tangle technology, which is the focal innovation behind IOTA.

The IOTA blockchain is a decentralized cryptocurrency, which allows the exchange of value and information with no fee. The goal of IOTA is to create a safe financial ecosystem that promotes the exchange of correct information between devices thanks to Tangle, Data integrity, scalability, cost, and availability. These are some of the factors that’ll make IOTA a huge success in the IoT ecosystem.

However, given the rapid and massive advancements in quantum mechanisms, Artificial Intelligence, and lots more, there are possibilities for IOTA to overpower the mass use of blockchain as more companies engage with IOTA in collaborative deals.