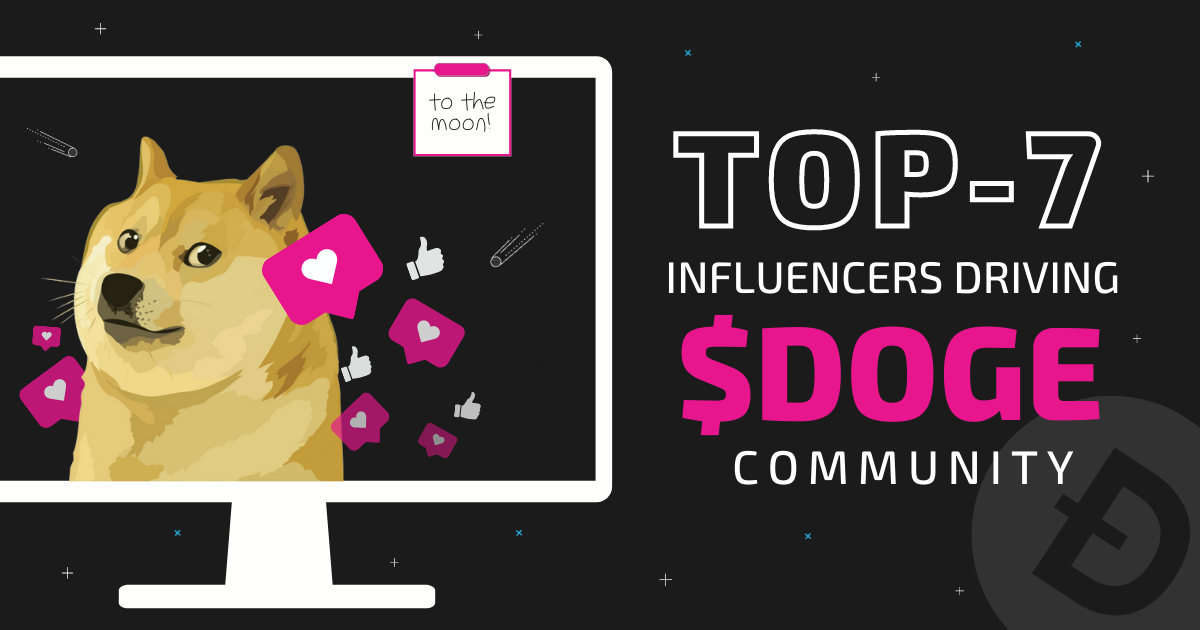 Dogecoin (DOGE) is one of the most popular cryptocurrencies today, with over 3.2 million followers on Twitter alone. This huge Twitter following is largely attributed to the impact of major Twitter crypto influencers, of which Tesla’s CEO, Elon Musk, stands out as the super influencer.

DOGE is an open-source meme coin created based on the Shiba Inu dog with the dog face featured on the coin. The coin was created in 2013 by Billy Markus and Jackson Palmer as a fork of Litecoin, which is a fork (an improved version of a particular blockchain) of Bitcoin itself. The founders anticipated the rapid adoption of Dogecoin by the crypto community, dog lovers especially, but the internet sensation around Dogecoin began to take off when Elon Musk entered the game as a major holder and influencer.

This article will explore why influencers are important in the crypto industry and the biggest crypto influencers who share relevant news, tweets, comments, and predictions about Dogecoin. Let’s get started!

Influencers in Crypto: Why Voices Matter?

Today’s investing in cryptocurrency involves personal research on a blockchain’s utility, checking out for influential promotions, crypto analyst predictions, or social media hype. Crypto influencers are highly esteemed persons with the ability to facilitate the adoption of a cryptocurrency by their community of followers. Following some of these top crypto influencers can help you stay current with the latest developments in the blockchain ecosystem.

One of the biggest factors contributing to crypto price movements is statements from the biggest crypto influencers. A tweet from them can get a cryptocurrency value shooting to the moon, and one negative comment can set a coin tumbling to deep dumps. You want to make sure you’re following them on social media to stay abreast of recent trends in the crypto space.

Sometimes, cryptocurrency founders can partner with these influencers to endorse a project to promote awareness and boost credibility in their crypto community. At the same time, other founders have succeeded in building specific crypto communities around themselves.

One of the greatest community-driven cryptocurrencies is Bitcoin. Many Bitcoin holders are holding their Bitcoins because they believe Bitcoin’s price will continue to rise. Some experts even predict it reaching $100,000 in the next few years.

The Dogecoin community is also one of the biggest crypto communities globally, with members holding DOGE with an unrelenting belief in the future of Dogecoin. As long as fear, uncertainty, and doubt don’t saturate the dogecoin community, Dogecoin will prove to be a profitable investment in the long run.

Elon Musk is the number one Dogecoin influencer of all time. The serial entrepreneur has managed to cause constant crypto waves in the Dogecoin community with many series of tweets that mostly send Dogecoin pumping hard. Recently, Elon Musk tweeted his intent to buy Twitter and incorporate Dogecoin as a medium of payment for services. The tweet generated significant momentum sending Dogecoin flying up by nearly 14%. When he finally sealed the deal and acquired Twitter, Dogecoin pumped by 22% in one day. Elon Musk’s influence on the Dogecoin community cannot be underestimated, and he remains top on the list of crypto influencers.

Getting to know the top influencers in crypto is essential to stay updated in the blockchain industry. We’ve compiled a list of the top voices in the Dogecoin community. Let’s dive in!

@dogeofficialceo Sir Doge of the Coin

Sir Doge of the Coin, as this Twitter influencer profile name reads, is among the top crypto influencers. As the “Protector of Coin #Dogecoin,” Sir Doge constantly shares news, updates, and retweets relevant information for the dogecoin community. Having posted over 47,000 tweets, with most of them being about Dogecoin, memes, and dogs, dogeofficialceo has gathered more than 38,000 Twitter followers. If you want a light-hearted and informative Twitter page, dogeofficialceo is the one to follow.

Dogecoin_empire on Twitter stands out as a top voice in the Dogecoin community. The balance of entertainment and informative content on this influencer’s page is top-notch! Lil’ Doge followers interact with major predictions, tweets, trends, retweets, and memes about Dogecoin.

Cryptunez sits among the biggest crypto influencers with over 160,000 Twitter followers. This influencer’s page contains relevant educational and informative content about Dogecoin and navigating the crypto space. As a long-term holder of DOGE, Cryptunez believes Dogecoin will hit as high as $3 and continues to show support for the coin.

DogecoinRide is the one big support person every Dogecoin holder needs. This twitter influencer firmly believes DOGE will hit the one-dollar mark and constantly promotes discussions around Dogecoin to more than 480k followers. If you are on the dogecoin ride to the moon, you might consider following dogecoinride for constant tweets, news, and updates on Dogecoin.

Matt Wallace is that person that tweets “dogecoin” and gets more than 1,500 likes in no time. Based in the US as a major crypto YouTuber, Matt has gained over 600k followers in 6 years. Matt’s YouTube account, Final stand, is described as the biggest Dogecoin community on the internet and features trends, news, interviews, and other informational content on Dogecoin.

Dogecoinrise is one of the biggest twitter crypto influencers with a whopping 16,000+ tweets dedicated to all things Dogecoin. Like other crypto influencers, Dogecoin Rise believes DOGE will moon to worth $1 and doesn’t relent in fueling the Dogecoin community with this optimistic projection.

TopDoge is one of the top influencers in crypto, actively supporting the Dogecoin community. This twitter influencer is an enthusiastic Dogecoin holder and constantly promotes discussions on Dogecoin. If you want a mix of constant updates, info, and memes about Dogecoin, ensure you follow TopDoge on Twitter.

The Dogecoin community is growing stronger, and the recent twitter acquisition by Elon Musk with news about adopting DOGE as a payment method are potential catalysts to the rise of Dogecoin. If you’re looking to join an active Dogecoin community, then you should consider following the crypto influencers we’ve highlighted above.

Most Dogecoin holders believe that Dogecoin will reach $1 in valuation, so if you’re ready to bag some DOGE coins, you can get them easily on Swapzone by swapping some cryptocurrencies with DOGE. After completing the transaction, you’ll get some Dogecoin deposited into your wallet. Happy investing!